Hoban delighted to win on Mujid for Weld 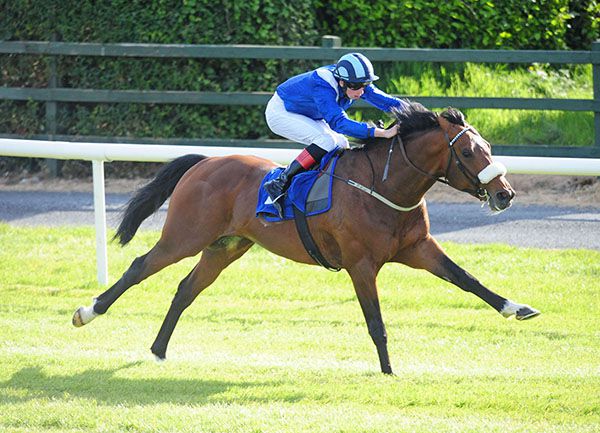 Mujid made nearly all to justify favouritism in the Killarney Racegoers Club Maiden over an extended mile to give Conor Hoban his first winner for Dermot Weld.

Hoban sent the Frankel colt into an early lead and the four-year-old raced enthusiastically.

The 5/4 favourite increased his lead to three lengths passing the three pole and was given a reminder approaching the furlong pole.

He kept up the relentless gallop to pass the post four lengths up on Make A Challenge (8/1). Hayyel was a further length and three quarters away in third at 12/1.

Conor Hoban said: "I appreciate getting the opportunity and it's a great yard to be associated with.

“When you get the chance it's nice to take it. I'm grateful for what I get.

“That was good and he did that nice considering he didn't really handle the track. He was still a bit green as it was only his second start but I thought it was a nice performance.

“The boss said if nothing went on to let him stride along as we know he'd stay. He jumped smart and there was nothing really keen to go on so I let him use his stride.

“He had a lovely run in Gowran Park and he stepped forward from it. I don't know how strong the race was but he did it well.

“It's a privilege to be riding in these colours (Hamdan Al Maktoum), never mind ride a winner, so it's great.”

The Stewards interviewed J.M. Sheridan, rider of Make A Challenge, concerning his use of the whip in the latter stages of this race. Evidence was heard from the rider concerned in the presence of John Gerard Fitzgerald. Having viewed a recording of the race and considered the evidence the Stewards were of the opinion that J.M. Sheridan was in breach of R10(3)(g) by using his whip with excessive frequency. Having taken his previous record into consideration, the Stewards suspended J.M. Sheridan for one race day.