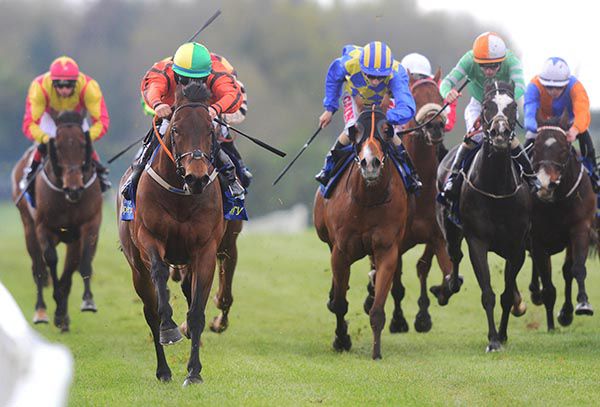 Denis Hogan and owner James McAuley followed-up on their success at Dundalk yesterday, as they combined to take the Tipperary Racecourse Handicap with Hathiq.

The pair struck with cheap buy Eastern Racer (bought for 800 pounds) at the all-weather venue, and they repeated the feat with Hathiq who was acquired for just 3,000 pounds.

Formerly trained in the UK by Owen Burrows, the son of Exceed And Excel won a maiden at Kempton on his third start back in November of 2016.

He was then off the track for well over two years, returning to action when making his debut for current connections at Naas last month.

He finished down the field on that occasion, but put in a much improved performance on his second start here, filling the runner-up spot behind Kasbah at Dundalk.

Available at 25/1 in early shows, the bay five-year-old touched 9s on-course, before going off an 8/1 chance under Rory Cleary.

Towards the head of affairs throughout, he travelled strongly in front at the two furlong pole, and stretched clear in the closing stages to score comfortably by three and a half lengths.

The Damian English trained Mokhalad, who was returned the 5/2 favourite, had to settle for second, while Sors (8s to 13/2) was a neck back in third.

Hogan said afterwards: "A big thanks must go to the agents James and Stephen McAuley who go to these sales and sometimes I wonder what they do be buying!

"They do all the spotting at the sales and do good work. They don't fork out big money and are cute and bought this lad for 3,000 pounds and he's now after winning a E25,000 pot!

"He works smart and is all speed and he could be a Rockingham horse or those Curragh races. We enjoyed those days with Tithonus and hopefully he can be something like that.

"He had pelvis problems before he came to us."

* B.M. Coen, rider of Dandyman Port trained by D. Donovan, reported to the Clerk of Scales that his mount refused to race.

* The Irish Horseracing Regulatory Board Veterinary Officer examined Dandyman Port, trained by D. Donovan, at the request of the Stewards and reported the animal to be post race normal.

* The Stewards informed D. Donovan, trainer of Dandyman Port, that a repeat of his charges behaviour, who refused to race, would render her liable to future sanction.