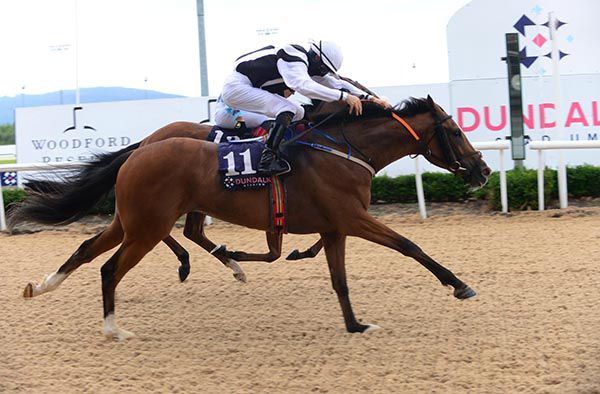 With first-time cheek-pieces on, Wojood, bought by Hogan out of the Hugo Palmer yard last September for 4,800 pounds, came home best to touch off Calidus Mirabilis by a neck.

The runner-up, a well-backed 11/4 market-leader, looked a winner when getting to the front under two furlongs out.

However he edged away to his right inside the final furlong and couldn’t resist Wojood’s finishing effort.

“We always felt he was a horse that would stay. He'll probably end up running over a bit further again and he galloped out well,” said winning jockey Joe Doyle.

“That will do the horse's confidence a bit of good as he's had a few tough races. Hopefully he can build on that.

“He enjoyed the surface here today, it's riding a bit slow and it probably suits him.”

The Stewards interviewed James J. Doyle, rider of Wojood (GB), concerning his use of the whip in the latter stages of this race. Evidence was heard from the rider concerned. Having viewed a recording of the race and considered the evidence the Stewards were of the opinion that James J. Doyle was in breach of R10(3)(g) by using his whip with excessive frequency. Having taken his previous record into consideration, the Stewards suspended James J. Doyle for 1 raceday.