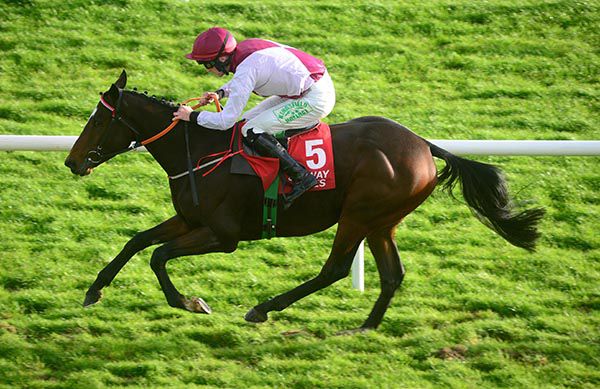 Luke Comer's Hollow Sound was another clear-cut winner in Ballybrit as he eased away from the field in the Jamie Kyne Memorial INH Flat Race.

He was still on the bridle as he began to move clear over two furlongs out while the pursuers were scrubbed along.

The race was over turning in as he was well clear of Fairyhill Run who was keeping on at the one pace.

Declan Lavery gave him the office over a furlong out and his mount scarpered 12 lengths clear at 12/1.

The aforementioned Fairyhill Run came in second at 10/1. She was seven and a half lengths ahead of Elusive Rebeldom at 8/1.

Assistant trainer Jim Gorman said: "I fancied him at Killarney and told Declan today he was fit, experienced and to make the most of it.

"I was doubtful about the ground and I think the experience of the three runs helped.

"He went mad at the (Galway) festival and should have been placed, but it is great to get this winner.

"He has schooling done and will go for a maiden hurdle now as the winners' bumpers tend to get hot around now."

Hollow Sound had been fourth in bumpers at Kilbeggan and Galway before finishing third in one at Killarney in August.