Home comforts for Cawley and Whatsafellatodo 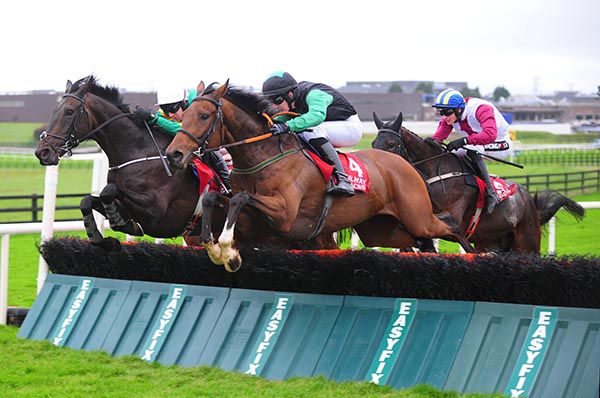 Whatsafellatodo, near side, unleashes his challenge
© Photo Healy Racing

Galway-trainer Brian Cawley enjoyed a winner at his local track as Whatsafellatodo took the extended two mile novice hurdle with Liam Gilligan in the saddle.

The five-year-old gelding was following up on a success in Listowel last month.

He raced around the home turn and had Lucky Icon and Paris Texas well in his sights.

He then arrived full of running on the outside to tackle the aforementioned pair at the last and landed with a narrow advantage from Paris Texas.

Lucky Icon's goose was cooked when he made a mistake. It was left to Paris Texas to try and deprive Whatsafellatodo but the latter forged on well in the run-in and was always holding the runner-up.

Whatsafellatodo went off at 4/1 in a competitive betting heat while Paris Texas, who was beaten by three parts of a length, was a 5/1 chance.

Cool Colonnade completed the placings in third, some four and a quarter lengths further back.

“I thought he came alive a bit early but he let him come down the hill and fill himself up. He battled well again today.

“I thought he had probably started racing a bit early but he left him alone down the hill and that was probably the winning of the race.

“I don't know where we'll go now, we've no plan. We'll let him come out of the race and then see.”