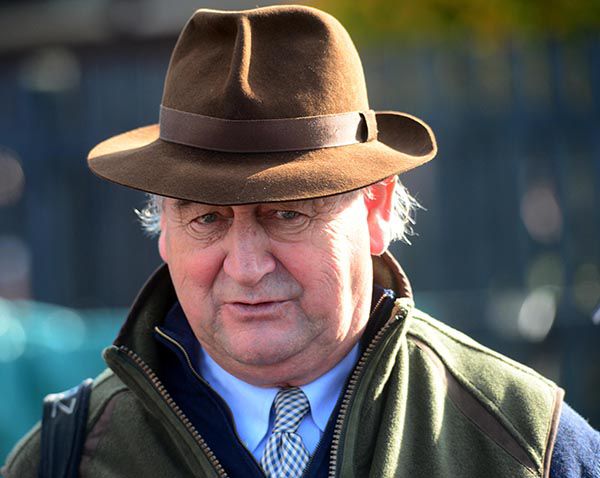 Noel Meade trains Beacon Edge
© Photo Healy Racing
The enterprisingly-ridden Jason The Militant was a surprise 25/1 winner of the Paddy Power Betting Shop Novice Hurdle (Grade 2) at Naas on Sunday, but connections of the placed horses came away optimistic for the future with their representatives.

Beacon Edge, not helped by a mistake and awkward landing at the last, was denied by just a nose as he finished strongly on his first start for over four months. Noel Meade’s Gigginstown-owned Doyen gelding was a smart bumper performer last term, finishing in the frame behind Envoi Allen and Colreevy in Graded events, and made a winning start over hurdles at Punchestown in October.

“We think he’s a very good horse and we always did, said Meade. He just got held up with me all winter.”

“He probably would have won with a good jump at the last. He just reached for it and got a bit unbalanced but it’s a good run for just his second run over hurdles.

“If you look back at his form he was beaten just three lengths by Envoi Allen. His form is top class.

“He handled that ground well and I’d say he doesn’t want it too quick.

“I don’t know what the plans are and I’ll have to talk to Michael and Eddie (O’Leary) before seeing where he’ll go.”

A further four lengths back in third place was the 6/5 favourite Andy Dufresne, carrying a 6lbs penalty after his win in the Sky Bet Moscow Flyer Novice Hurdle at Punchestown (Grade 2) last month. He was outpaced before the final flight before keeping on in the closing stages.

Having had a big reputation at the start of the season following his point-to-point and bumper victories, the six-year-old, also by Doyen, has perhaps not yet fulfilled all the expectations that some had for him at that stage. His form still stacks up quite well, though, with his only other defeat coming at the hands of subsequent Grade 1 winner Latest Exhibition at Navan.

Trainer Gordon Elliott had already announced that the J.P.McManus-owned gelding would miss Cheltenham, and he retains plenty of faith in his charge.

“I’m always disappointed when you get beat but he’s given away weight to everything. Mark said he hit a bit of a flat patch but then he kept galloping and he couldn’t pull him up after the line.

“He’ll be a nice horse to go jumping fences. He’s only a shell of a horse.”

Following a consultation process this week with all Point to Point Handlers and other Point to Point industry stakeholders by the Irish National Hunt Steeplechase Committee (INHSC) and the Irish Horseracing Regulatory Board (IHRB), the level of interest expressed for the proposed Point to Point Bumper Trials for horses with Hunter Certificates was sufficient that the concept can be explored and developed further.

Racing fans can do their bit to help those working at the frontline of the coronavirus pandemic by bidding on a list of superb organised events together with racing memorabila as HRI have set up an online auction site as part of the National effort to ‘Feed The Heroes’.

Ward hoping for big year ahead with Kimari

Wesley Ward plans to work back from the Breeders’ Cup Sprint with Kimari following her impressive return to action at the weekend.

It was no surprise when racing behind closed doors came to an end and the rest of the National Hunt season was cancelled. You were wondering if they might put it on at a later date but with the way things are at the moment I think they had to make the call.