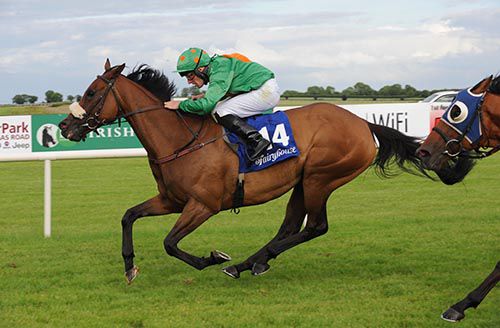 Michael Hussey was the second jockey at Fairyhouse today to come in for a winning spare ride as a result of Kieren Fallon’s enforced absence when riding the Paddy Mooney trained Full Shilling to win the Coral.ie Bet 5 Get 20 In Free Bets Handicap.

A morning fall resulted in Fallon missing Full Shilling along with Bainne’s opening win (under Colin Keane) but Hussey proved an able substitute, eventually finding racing room in the straight before sending the winner clear for a length and a quarter win over Enter The Red.

Afterwards Mooney stated “she was a bit unlucky the last day at Naas, and the cut in the ground suited her. She got a good old drive from Michael.

"She looks like she is coming in season but she got the job done. She won four times in England, and is getting back to that form. She's entered in Bellewstown on Friday but that will come too quick. I think she will get seven furlongs somewhere like Roscommon."