Impressive return from Earthlight at Deauville 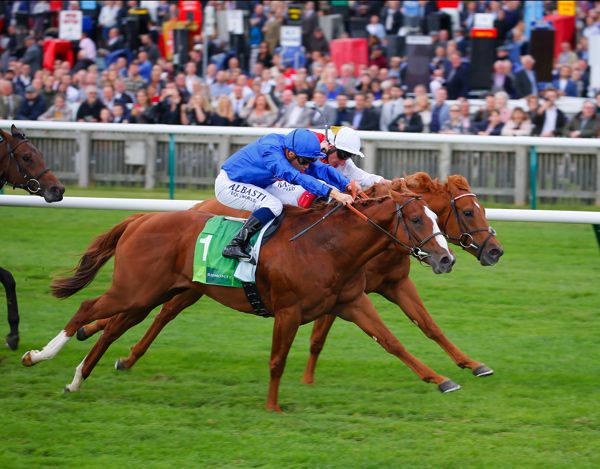 Earthlight
© Photo Healy Racing
Earthlight maintained his unbeaten record with an impressive return to action in the Qatar Prix Kistena at Deauville.

Andre Fabre’s colt was one of the star juveniles in Europe last season — winning each of his five starts, including Group One triumphs in the Prix Morny over this course and distance and the Middle Park at Newmarket.

The coronavirus pandemic, followed by a minor setback, has delayed his three-year-old debut — and with fellow Godolphin-owned colt Pinatubo running in the Prix Jean Prat later in the afternoon, Earthlight instead ran in Listed company on the undercard.

Ridden by Mickael Barzalona, 3-10 favourite Earthlight was always travelling powerfully — and the result was scarcely ever in doubt.

Once given his head, the son of Shamardal comfortably grabbed the lead before kicking clear in dominant style. Wanaway (25-1) was best of the rest two and a half lengths away in second.

Fabre said: “It was a good performance. He travelled nicely and showed good speed, so I’m happy.

“We have two options — we either go for the Prix Maurice de Gheest or we step up in distance. We will discuss it with Sheikh Mohammed and see where he wants to go.”

The Godolphin operation was on the mark again in the Qatar Prix Amandine, with Charlie Appleby’s British raider Althiqa emerging victorious in a thrilling finish.

A winner of her first two career starts, the grey filly was last seen finishing a close-up third in the Eternal Stakes at Haydock.

After going off the 7-4 favourite to strike Listed gold at the second attempt, Althiqa displayed a willing attitude in the hands of William Buick to get the better of a protracted duel with My Love’s Passion by a head.

Appleby said: “I thought it was a good performance from the filly — she toughed it out well.

“She ran a good race at Haydock last time, and to get some winning black type for her today is great.”

Appleby and Buick successfully combined with Pinatubo in the Prix Jean Prat, before completing a treble for the afternoon with Royal Crusade in the Group Three Qatar Prix de Ris-Orangis.

Sixth on his first start of 2020 in the Commonwealth Cup at Royal Ascot, the 5-4 favourite flew home from the rear to beat the Archie Watson-trained Glen Shiel and Karl Burke’s Dubai Station in a British-dominated finish.

“It was probably trainer error with him last year — I was stretching him out, running over seven furlongs,” said the Newmarket trainer.

“We were delighted with his first run of the year in the Commonwealth Cup, and I thought he’d taking a bit of beating today.

“It’s been a great day here in the sunshine at Deauville.”

Francis-Henri Graffard’s inmate won the Coronation Stakes at Royal Ascot last summer, before performing well in defeat in both the Prix Jacques le Marois and the Prix de l’Opera.

Making her first start since the latter of those efforts last October, Watch Me travelled smoothly in the hands of Pierre-Charles Boudot and won with plenty in hand.