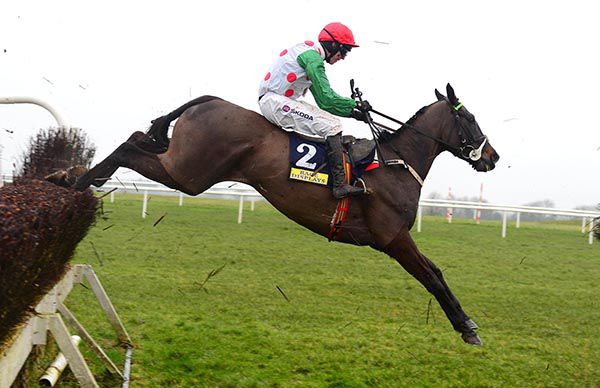 Drumconnor Lad
© Photo Healy Racing
After winning at Down Royal on Monday, Drumconnor Lad will bid to quickly follow up in the feature at Kilbeggan this evening, the Belvedere House, Gardens & Park Handicap Chase.

The Adrian Keatley-trained eight-year-old was a cosy winner earlier this week, and will carry a 6lb penalty, despite an official rise of 7lb.

Roger Loughran again takes the ride on the son of Winged Love, who faces stiff opposition in the shape of Newsworthy, Net D’Ecosse and William Du Berlais.

Newsworthy was successful at Ballinrobe recently, and he is sure to have plenty of supporters with Jack Kennedy booked to ride.

Net D’Ecosse was a fine fifth on his last start in the Munster National in October, while William Du Berlais will carry just 9st 12lb, with Donie McInerney taking off 7lb.

The Jessica Harrington-trained Thirsty Work is another for the shortlist, however the Moone handler looks to have stronger claims elsewhere on the card.

She saddles Punchestown third The Holy One in the Farmers Journal Maiden Hurdle, and this 125-rated gelding should prove hard to beat.

This son of Kayf Tara was a bit disappointing at the Punchestown Festival, but dropping in class now he can be expected to go close.

The Willie Mullins-trained Redhotfillypeppers is an obvious danger, while Scheu Time and The Granson are others to consider.

This son of Urban Poet looks up against it here, with Tramore winner Tornado Watch, the hat-trick-seeking Callthebarman, and handicap debutant Khuda the stand-out names.

David Mullins will be aboard Tornado Watch, while he takes the ride on Steel Wave in the Midland Veterinary Ltd Beginners Chase.

The son of Craigsteel is a dual winner over flights, and makes his debut over the larger obstacles, with Adimelo and Bosco Di Alco appearing his chief rivals.

The opening race on the card, the Midland Veterinary (Tullamore) Ltd. Maiden Hurdle, looks a weak affair, with Cote Tete and Plouios likely to prove popular.

Thirteen horses have been declared for the concluding Midland Veterinary (Tullamore) Ltd. (Pro/Am) Flat Race, with Sunday At Augusta, Sancta Simona, and Active Force the ones to focus on here.