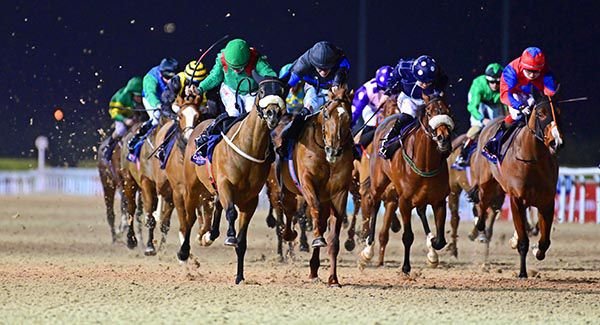 The son of Australia was third on debut at the Co Louth venue in December and while he didn't travel well today, did eventually grind out a head win over 76 rated Razdan, who ran in a first-time hood and didn't look entirely straightforward.

“I was slowly away but he showed a nice attitude. He ended up being in front a long way out but was in front where it mattered.

“Once he gets to the grass I think he'll improve away. He was only having his second run and he's a huge big individual. He should learn plenty from today and step forward again.

“He's by Australia so we'd be hoping he'd get further.”

Leopardstown is good to yielding for today’s eight race card with the weather set to remain mainly dry. Selective watering of the chase track took place after racing yesterday.

Tom Scudamore is determined to contain his excitement for the next five weeks after the “tremendous” performance which has given Cloth Cap a stranglehold on the Randox Grand National market.

Ryanair run for Kalashnikov will be 'last-minute decision'

Amy Murphy is planning a high-profile spring campaign for stable star Kalashnikov — although his participation in the Ryanair Chase is less likely than a trip to Aintree next month.

Meade to send small team to Cheltenham next week

Road To Respect in the Festival Plate Handicap Chase in 2017 was the most recent of Noel Meade’s five Cheltenham Festival winners and the Meath handler will have a select team to represent him at this year’s renewal.