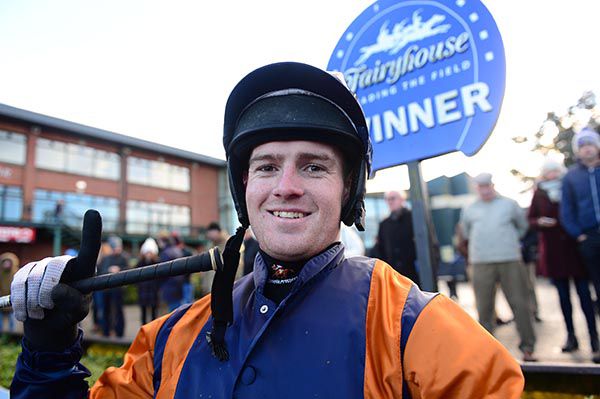 James Reilly
© Photo Healy Racing
Jockey James Reilly was suspended for 10 race days after his ride on Unexpected Depth in the opening maiden hurdle at Ballinrobe.

The stewards report is below:

The Stewards enquired into the running and riding of Unexpected Depth, ridden by Mr J.W. Reilly, and trained by Oliver McKiernan. Evidence was heard from the trainer and rider concerned. Oliver McKiernan, stated that he instructed the rider to jump off in mid division and to do his best. He added that his charge jumped off further back than instructed and met interference at the first hurdle which possibly frightened both the horse and rider. In his opinion his charge travelled and jumped well apart from jumping high at a few hurdles. He felt that the rider was pushing his mount who appeared to be off the bridle and unable to get any closer to the leaders. Mr J.W. Reilly confirmed the riding instructions and stated that he was pushed back at the start and jumped off towards the rear of the field. He added that the fall of Spittal Field at the first hurdle had frightened his mount which has a nervous tendency. As the race progressed he said that he tried to niggle his mount back into the race but the animal jumped big at a few hurdles and only stayed on past tired horses despite emptying in the straight when being squeezed. The Stewards also received a report from the Irish Horseracing Regulatory Board Veterinary Officer who stated that Unexpected Depth was post race normal. Having viewed the recording of the race and considered the evidence, the Stewards noted the trainers explanation. The Stewards, however, were of the opinion that Mr. J.W. Reilly was in breach of Rule 212 (ii) as the rider rode in such a way that the horse was not seen to have been the subject of a genuine attempt to obtain from the horse timely, real and substantial efforts to achieve the best possible placing and suspended him for 10 race days. No sanction was imposed on the horse.

Pinatubo ready for date with destiny in Guineas

Charlie Appleby has full faith in Pinatubo’s ability to stay a mile as the hot favourite faces his date with Classic destiny in the Qipco 2000 Guineas at Newmarket this afternoon.