Kaluz makes most of 'lovely opportunity' 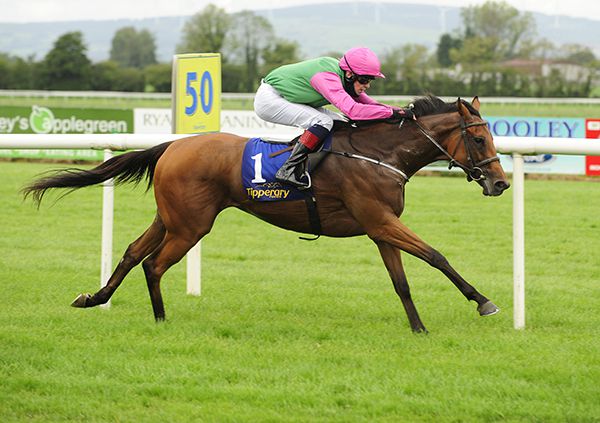 The 4/1 shot broke well from stall one and raced prominently before taking over from Rich Law No Law after a furlong.

The leader had Rich Law No Law off the bridle approaching the straight and was ridden to go and win her race over a furlong out.

She kept finding along the rail and closed the race out by a comfortable two lengths.

Creative Mojo, the 10/3 favourite, got up for second without landing a glove on the winner. Rich Law No Law (9/2) dropped half a length back to third.

Trainer James Barrett said: "It was a lovely opportunity for her and she always worked like she was a maiden (winner), but Ronan Whelan rode her on her second last race and said to up her to a mile.

"She got stuck in the muck at Leopardstown and did too much in front, so that is what I was afraid of. She is a better filly with a bit of cover, but Luke gave her a very intelligent ride and popped out and slowed it up in front and had them all stacked up behind him.

"She was always going to stay galloping and she'll be a lovely filly next year; there may be another one in her this year, but next year we'll have a right bit of fun with her."

The Stewards requested a report from James M. Barrett, trainer, as to the apparent improvement in form of Kaluz (GB), placed first, as compared with its recent run at Leopardstown 20th August when finishing last of the ten runners . The trainer reported that his charge ran well for some part of the race the last day but tired quickly in the very testing ground conditions. He felt that today's good ground conditions were the contributing factor to the improved performance. Having considered the evidence the Stewards noted the content of the report.