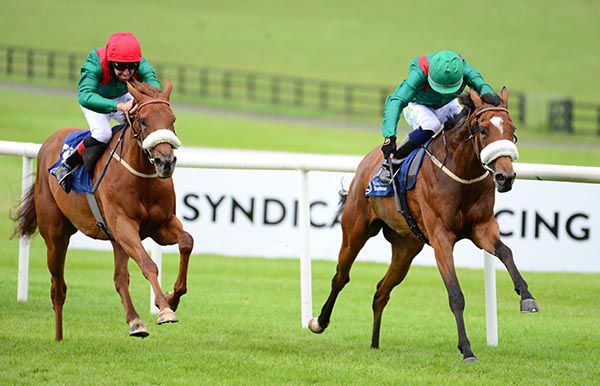 Kassaba led home a 1, 2 for Dermot Weld and the Aga Khan in the fifth at Naas, the Irish Stallion Farms EBF Maiden.

An eye-catcher when a never nearer fourth on debut at Leopardstown in July of last year, the successful daughter of Charm Spirit was second off a 3/1 chance this afternoon.

Settled in second by Oisin Orr, she was ridden to the front over a furlong out and kept on well from there to see off the late challenge of stable mate Zawara (16/1) by three parts of a length.

The front-running Paradiso (11/4) was another five lengths back in third, while Ivan The Great, who was returned the 5/2 favourite, could only manage fifth.

Kris Weld said afterwards: "She's a half-sister to Kastasa but I don’t think she will be staying quite as far as her.

"We'll see how she comes out of the race but she's a filly you would hope to be getting black-type with at some stage during the year.

"She's a big filly and has grown so we weren’t in any rush with her. I'd imagine she will probably be going over ten furlongs next time. The ease in the ground certainly wasn't a hindrance to her.

"The second is also a nice filly. She is beautifully bred and we thought she'd run well."