Kennedy doubles-up aboard Phil The Flyer 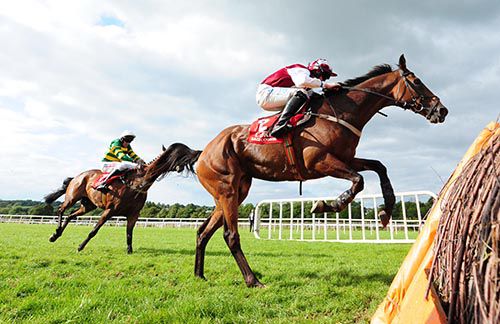 Phil The Flyer made all to win the Buy Online @corkracecourse.ie Handicap Hurdle providing his jockey Jack Kennedy (replaced Kevin Smith) with a double on the card (earlier won aboard My Manekineko).

Sent straight to the front the eight-year-old son of Broadway Flyer was ridden after three out and responded well to pressure, keeping on well on the run-in to see of Just Call Me by a length.

Just Call Me was returned an 8/1 chance under Barry Geraghty for Andrew McNamara while Day Day was a further five lengths back in third under Mark Walsh for John Berry at 20/1.

Cadawill (7/1) completed the placings a further nine and a half lengths back in fourth under Ger Fox for Rodger Sweeney while the well-backed 9/2 favourite (from 11/2 on-course) Late Night Deed finished completely tailed off in last.

Winning trainer Ray Hackett said afterwards: "He can be flat after his races and needs time. If he's right he'll run next at Listowel but he'll tell us.

"He has schooled over fences and will go chasing soon."

* A.E. Lynch, rider of Steel Wave trained by Garrett James Power, reported to the Clerk of Scales that his mount made a bad mistake and his saddle slipped.

* P. Townend, rider of Late Night Deed (GB), trained by Garrett James Power, reported to the Stewards' Secretaries that his mount missed the fifth last and cut out quickly.

* The Turf Club Veterinary Officer examined Late Night Deed (GB), trained by Garrett James Power, at the request of the Stewards and reported the animal to be making an abonormal respiratory noise, blowing hard and coughing post race.