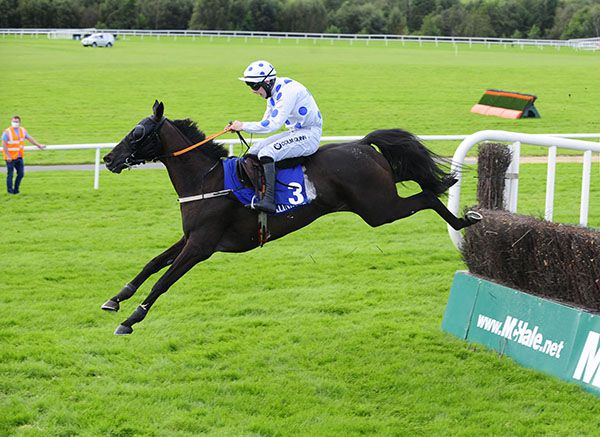 Doctor Duffy
© Photo Healy Racing
Charles Byrnes is keeping his fingers crossed Doctor Duffy can continue his progression and put up a bold show in the Guinness Kerry National at Listowel on Wednesday.

The high-class hurdler was beaten on his first three starts over fences — finishing fourth on his chasing debut at Tipperary before suffering short-priced defeats when runner-up at Roscommon and Galway in July.

However, Doctor Duffy rewarded those who kept the faith when scoring in a first-time visor at Kilbeggan last month — and the headgear seemed to do the trick again when he followed up in the Mayo National at Ballinrobe two and a half weeks ago.

Byrnes said: “It took him a good while to get his act together over fences. He couldn’t win a beginners' chase not that long ago — but his last two runs have been good, and the visor seems to have helped him.

“He’s up in grade and doesn’t have a lot of experience over fences, but we’ll hope for the best.

“If he runs like he did in Ballinrobe, he should run a good race.”

Doctor Duffy is the clear favourite in a maximum field of 18 runners.

The eight-year-old mare is joined by stablemates Robin Des Foret (David Mullins) and Blazer (Mark Walsh), who finished second and third respectively in a handicap chase at Killarney last month.

Mullins’ assistant David Casey said: “Cabaret Queen ran a great race in the Galway Plate. I think the track and the ground should suit her, so hopefully she’ll run well again.

“We’re putting cheek-pieces on Blazer for the first time, which I think will make a big difference to him. He’s in good form and ran a good race in Killarney the last day — I could see him running a big race.

“Robin Des Foret has been second in a couple of good races in Killarney this year, which is a flat track and similar to Listowel. He disappointed in the Galway Plate, but I think coming back to a flat track will be a help to him.

“Hopefully they’ll all run well. It’s a competitive race, but you can make a case for them all.

Gordon Elliott has a couple of representatives in Ravenhill and Three Musketeers, while Joseph O’Brien has Mortal and second reserve High Sparrow in contention.

The main attraction on the undercard is Elliott’s Malone Road, who puts his unbeaten record on the line in the Seamus Mulvaney Bookmaker Novice Hurdle.

The Cheveley Park-owned triple bumper winner returned from the best part of two years off the track to make a winning debut over obstacles at Kilbeggan last month, and will be strongly fancied to follow up faced with four rivals.