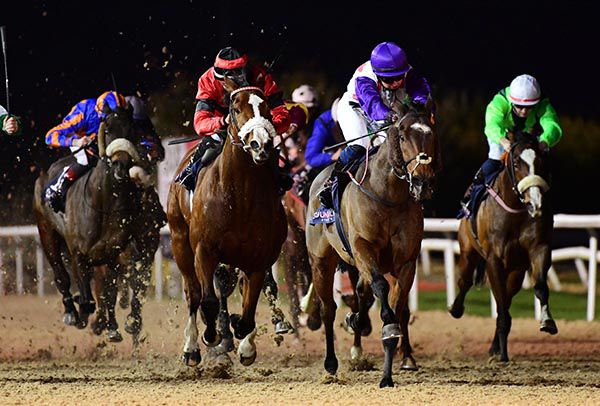 Connections of Kudbegood had the longest wait of all. After twenty nine outings though, the five-year-old son of Most Improved is a maiden no longer, beating Gormanstown by a length.

Under Siobhan Rutledge (11th win) the 5/1 victor dwelt at the start. He soon had a mid-field sit, travelling smoothly up the inner.

He found for pressure when required, and though drifting to his right he got the upper hand on the aforementioned market-leader Gormanstown.

It was just a neck and a short head to Golden Days and Philly’s Hope in third and fourth.

“That was very sweet. He's been called a few names over the past couple of years, and probably has his own mind about the game, so it's great to get his head in front,” said winning trainer John McConnell.

“The people involved have been so patient and they would have given up all the seconds and thirds for that one victory. I'm sure they are over the moon.

“What a brilliant ride by Siobhan. We hummed and hawed whether to play him late or try and go and kill it.

“I said to her before 'go and try and kill it a furlong out and they mightn't come back to him'. She's done exactly as she was told and made up his mind for him.”

The Irish Horseracing Regulatory Board Veterinary Officer examined Amarantha, trained by Joseph Patrick O'Brien, at the request of the Stewards and reported the animal to be post race normal.

The Stewards enquired into an incident in the home straight involving Laurel Grove, ridden by Sam Ewing, unplaced, Airlift, ridden by D.E. Sheehy, unplaced and Majestic Matriarch, ridden by J.M. Sheridan, placed fifth, where it appeared that Airlift got tight for room and had to cheek. Evidence was heard from the riders concerned. Having viewed the recording of the race and considered the evidence, the Stewards found J. M. Sheridan in breach of rule 214, in that he had ridden carelessly. Having considered J. M. Sheridan's record in this regard the Stewards suspended J. M. Sheridan for three racedays. Sam Ewing was accompanied at this enquiry by Mr. Niall Amond.

"50-50" call on Santini's participation at Cheltenham on Saturday

Last season’s Gold Cup runner-up Santini is only “50-50” to run in the Paddy Power-sponsored Cotswold Chase at Cheltenham on Saturday.

Down Royal rescheduled for Thursday February 4

Following the cancellation of today’s scheduled meeting at Down Royal due to frost, Horse Racing Ireland has announced that this meeting will now take place on Thursday February 4.

The Willie Mullins-trained Acapella Bourgeois heads the 18 runners for the Goffs Thyestes Handicap Chase at Gowran Park on Thursday.

Potters Corner is to have the Glenfarclas Chase over the cross-country fences at the Cheltenham Festival as his prep race for the Randox Health Grand National.