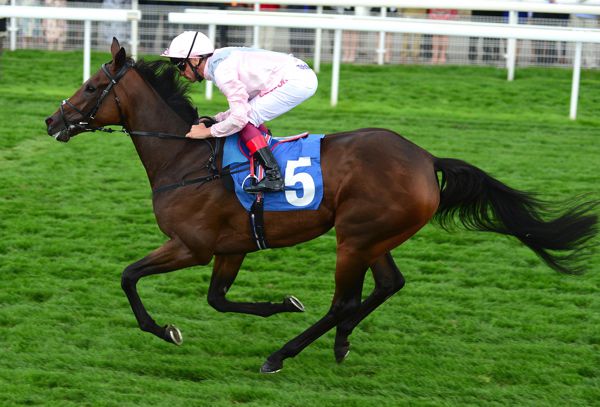 The St Leger runner-up was stepping down to a mile and a quarter for the first time in 12 months and the 1-3 shot needed every yard to take the Group Two honours.

Queen Of Time set an honest pace until the straight, where the tempo increased and the race hotted up.

Frankie Dettori appeared to be confident enough on Lah Ti Dar — but he had to roust the John Gosden-trained filly to see off the persistent challenge of Sir Michael Stoute’s Rawdaa by a neck.

Stoute’s other runner, Sun Maiden, was third after looking menacing two furlongs out.

Gosden said: “I think she’s done well to win over a mile and a quarter on summer ground.

“We can have a look at the Coronation Cup (at Epsom). She’ll appreciate the step up in trip, she’s very game and genuine, but that would not have been her speciality today.”

Stoute said of the runner-up: “That was a big step forward, it was a long way ahead of anything she’s ever achieved before, so I’m very pleased.”

He added: “Sun Maiden looked the winner at one stage. She showed a good attitude, which was nice, as her form tapered off badly in the second half of last season, so it was good to see her being so competitive.”

The high-class Lah Ti Dar prevails over Rawdaa in a thrilling Group 2 Middleton Stakes for John Gosden and Frankie Dettori at @yorkracecourse pic.twitter.com/yIvE1wUAAo

Bruce Raymond, racing manager to Abdullah Saeed Al Naboodah, owner of Rawdaa, said: “She had options in Listed races, but Sir Michael said he was going for the Group Two and when he suggests something it is usually worth listening to.

“We expected her to run well, but perhaps not quite as well as that. We frightened the winner, I think.

“Our filly was pretty fit, she’s been working very well and the ground was fine. It looks as if she’ll stay further, but there’s plenty of speed in her pedigree. She’ll go wherever Sir Michael sees fit.”