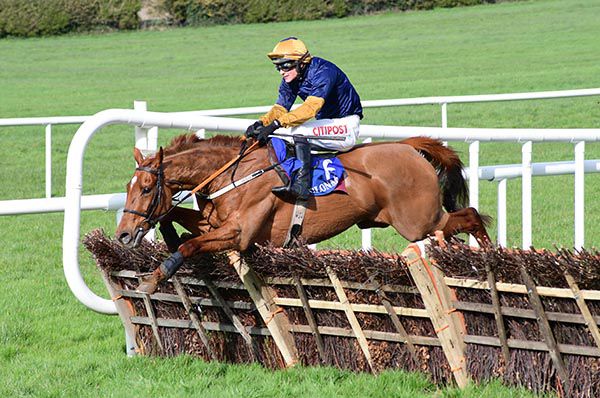 On his sixteenth racecourse outing Shantou Sisu (9/4 favourite) shed his maiden tag in the Extra Places On The BoyleSports App Handicap Hurdle at Clonmel.

The Shantou gelding was unfortunate when falling here two out in December, and he was ‘short-headed’ then, also at Powerstown Park, earlier in the month.

Five times a beaten market-leader prior to today, Shantou Sisu put it all right in the hands of Danny Mullins.

Trained at Coolrain County Laois by Billy Lanigan, the successful eight-year-old made all.

He went clear and was pushed along two out. Ridden and making a slight mistake at the last, Shantou Sisu stayed on well to comfortably beat Clody Valley by six lengths.

Mattie’s Mountain, the 5/2 second favourite, tracked the leaders, and after a slight mistake at the fourth he received reminders. Ridden after three out, Mattie’s Mountain was under pressure in sixth when hampered after two out and slipped up.

“He’s been running consistently well and his owner Hugh Laing is a friend of mine for 45 years or more so it’s nice to win,” said Lanigan.

“He’s a very difficult horse to train as he’s a very hard puller and my son Billy rides him every day.

“You’d want to have you’re porridge before you ride him as he works the way he runs, at breakneck speed.”