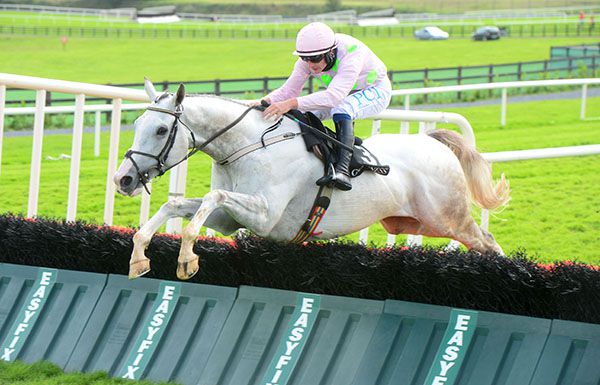 Mullins led O'Brien by six winners to four at the start of today's final national hunt fixture and while O'Brien's Risk Factor gave him some chance of keeping tabs on Mullins, the 'jolly' was held by N'golo when unshipping J.J. Slevin at the final flight.

N'golo's own passage through the race was less than straightforward and having led early-on, attempted to run out at the hurdle in front of the stands.

He did subsequently benefit from having a lead from Risk Factor and in the dip went clear of that rival before scoring an eight and a half lengths winner from Make Good.

Following the race David Casey, representing Mullins, stated “it was his first run coming from France and was generally good but had a look at something (at the last with a circuit to race).

“He had been working well at home, he is a big strong horse and should improve from that.

“He is grand at home, pops and jumps and he'd go on slower ground.”

Trainer Mullins sank the good ship D.K. Weld with a first Galway Leading Trainer's title in 2016 and is now on course for a fifth consecutive title.

There was a double on the card for Ado McGuinness in the finale tonight, as in the Story Of Dundalk Stadium Book Buy Online Handicap, Pure Nature took the honours in the hands of Adam Farragher.

Arcanears delights Mrs Roper and Halford with another win under Whelan

A Step Too Far failed in her bid for a 7th success in a row, finishing towards the rear, as Arcanears took the feature at Dundalk, the Scarefest Competition On Instagram Handicap.

The 45 to 65 Irishinjuredjockeys.com Handicap at Dundalk saw less than a length and a half cover the first six home. At the head of affairs for Jim and Jackie Bolger Legal Thriller short-headed Chagall.

McGuinness one two as Ryan excels on Raphael