Lee outstays rivals to bounce back 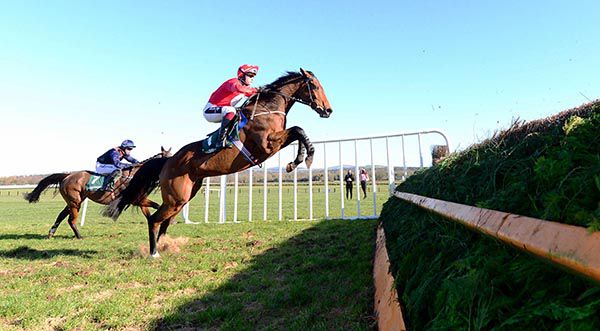 Top-weight Home By The Lee stayed on best in the closing stages to land a nice pot in the Paddy Power Novice Handicap Chase at Naas.

The Joseph O'Brien-trained gelding was reported to have burst a blood vessel on his last outing at Leopardstown over Christmas.

He bounced back from that disappointing effort to run out a convincing winner of the €40,000 prize this afternoon.

JJ Slevin held his mount up in the two-and-a-half mile contest before driving him into contention before the second last.

The 5/1 shot took a narrow lead over the penultimate fence and galloped on strongly from the last to record a 10-length success over Enjoy D'allen.

“He was very relaxed in the paddock today and went down last lovely and relaxed.

“He jumps and he stays. You think he’s beat a long way out but he comes there and he tries. He’s an honest horse.

“He has a good win to run ratio at the moment and who knows what he will be. It’s nice to get his head in front again. I’m sure there is plenty for him at Fairyhouse and Punchestown.”