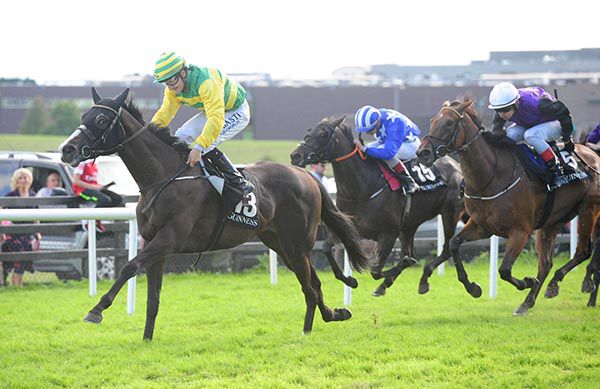 Dani's Boy (16/1) delighted his connections, owner/breeder Clive Craig and trainer Pat Fahy, with his success in the Arthur Guinness Handicap at Galway.

Some of them in behind didn't enjoy much luck in running, and Cache Queen and Passing Trade finished off well for second and third, half a length and the same off the winner.

Indeed it was another half a length to the fourth past the post, Karannelle, but there was no denying the Shane 'Dusty' Foley-ridden victor this special win.

Fahy explained: "What's amazing about this is that his mother (Dani's Girl) won here twelve years ago to the day.

"I said to the owner it probably couldn't happen again but thankfully it has.

"He wasn't claimed last time - thanks be to God - and he must be good because that's only his fourth run and his first in a handicap.

"You couldn't put a value on it - there's such excitement.

"The owner bought Dan's Girl off me. He went down to Joe Foley (stallion master) then, bred her to Arakan, so it's all local.

"This fella is just like the mother, a bit hyper, but this is great."

Jonjo O’Neill Jr is determined to keep improving after a breakthrough year that has seen him leap to the top of the conditional ranks.