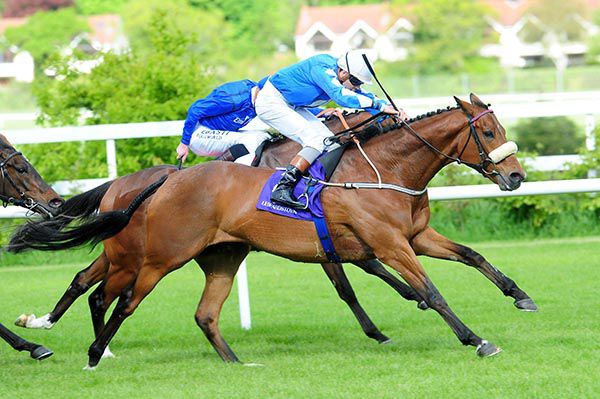 Sea The Lion
© Photo Healy Racing
Top-weight Sea The Lion is bidding to win the 50,000 euro Irish Stallion Farms EBF ‘Ragusa’ Handicap for the third successive time at the Curragh.

Young apprentice Gavin Ryan takes the ride on Thursday on Jarlath Fahey’s eight-year-old — last seen finishing an excellent third in the Ebor at York 10 months ago.

Among the opposition as Sea The Lion makes his belated return, the first two home in the Cork Derby, Perfect Tapatino and Massif Central, renew rivalries — while other interesting contenders are handicap debutant War Diary, the 97-rated Ming and Ger Lyons’ Inscribe.

Lyons’ gelding was a beaten favourite in seventh behind Perfect Tapatino at Cork, but had previously won well at Navan at the start of this month.

Later on the card, Ryan will be aboard the Jim Bolger-trained Trossachs in the Curragh Supporting County Kildare Twinning Apprentice Derby.

Ryan and Bolger combined successfully in the same race 12 months ago, with Dawn Hoofer.

A winner at Limerick on his last start, Trossachs appears a progressive sort and should give a good account of himself in a fiercely competitive affair.

Others for the short-list are De Name Escapes Me, Noble Expression, Moktamel and Olympic Honour — all of whom won last time out.

Newcomers dominate in the opening Irish Stallion Farms EBF Fillies Maiden, with the Ballydoyle trio of Ennistymon, Love and Meeting the eye-catching names.

Aidan O’Brien is again triple-handed in the Irish Stallion Farms EBF (C & G) Maiden — with his son Donnacha opting to partner Armory, who was a promising third on debut at Leopardstown.

The 96-rated Piano Solo should prove hard to beat in the Troytown Grey Abbey Veterinary Hospital Irish EBF Median Auction Maiden, while Macquarie may be able to get off the mark in the concluding Silken Thomas & Lock 13 Irish EBF Maiden.