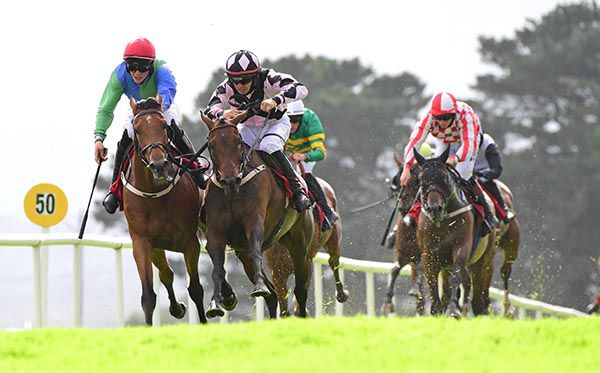 The daughter of Maxios today, under Conor Orr, ended a 27 race losing run when scoring a neck win win over Born By The Sea.

Trainer Eamonn Delany was represented by his son Alan Delany, a stalwart of the Bellewstown organising committee, who later reported “it was Conor's first time riding for me and he is a great lad and did what we asked him to do.

“I was hoping we'd get into the race but thought we'd no chance of getting into any of the handicaps so was very surprised when we did get in.

“She has been very consistent and while she is a small filly, was up at the top of the weights at Bellewstown on her last start and found it hard to carry it home.

“We said we'd be better going for a better race with a lower weight and she is entered for Sligo on Wednesday and could also go back on the flat. We'd like to go back to our local track Bellewstown but it is great to get a winner here.

“We have been training a long time and my grand uncle Ned Delany had the Galway Hurdle winner in 1938 with Serpolette; we have one named after him running at Sligo next week.”