Lynwood goes for Gold in Curragh 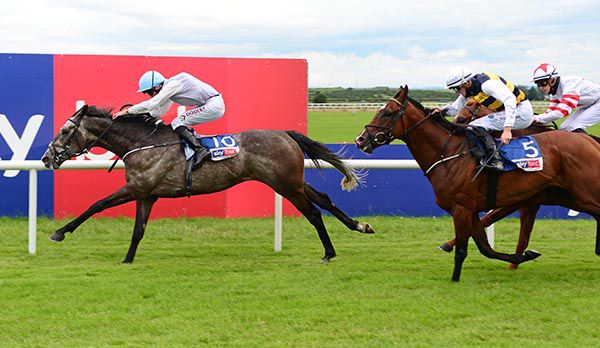 The alternative handicap came into play when top-weight Latrobe was a non runner in the concluding Ebor Trial Premier Handicap at the Curragh, and it was Lynwood Gold who saw the mile and six furlongs out best.

Lynwood Gold, who raced off 1lb higher, travelled kindly in third for Tom Madden behind the leader Edification and a niggled along King's Vow turning for home.

He was pushed along to account for King's Vow two and a half furlongs out, and soon closed on Edification.

He claimed the leader at the two marker and was ridden to 'go for gold'. The five-year-old kept finding for Madden and the pair fended off Mirann, who looked a major threat in the final furlong.

Jessica Harrington said: “He’s a good stayer, and he likes that bit of ease in the ground. He might run over hurdles in Galway.

“The Cesarewitch at the end of the year is probably his aim. How we get to there I’m not sure.

“I’m delighted with that as he’d been threatening to do it. I thought the second horse was going to go past him but he put his head down and came back at him.”

The Stewards interviewed Mr R. Sugrue, rider of Larry O, concerning his use of the whip in the closing stages of this race. Evidence was heard from the rider concerned. Having viewed a recording of the race and considered the evidence the Stewards were satisfied that Mr. R. Sugrue was in breach of Regulation 10.3 (g) excessive frequency and 10.3 (i) time to respond and having considered his record in this regard suspended him for two race days.

ITV has agreed a new deal to show British racing until 2023.