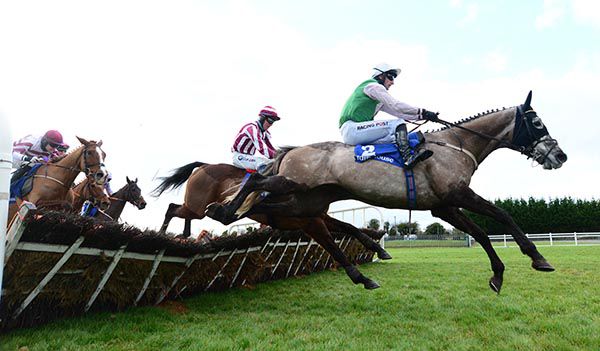 M C Muldoon got the last all wrong but had enough in the tank to take division one of Fairyhouse's maiden hurdle.

The 8/15 favourite sliced through the field under a motionless Patrick Mullins to lead between the final two flights.

He was untidy at the last, though, and bumped his main rival Whowonthetoss. Mullins swiftly got him back on an even keel and the six-year-old gelding, in the first-time hood, was ridden out to score by three parts of a length.

Whowonthetoss (8/1) kept on after the last in second. Lucky Tenner finished third at 16/5.

Willie Mullins said: “He's a horse that should improve for nicer ground in the spring time and we'll mix it between Flat and jumps with him.

“I think he'll improve over hurdles as he gets his jumping together. He's a big horse and could jump a fence in time.”

The Stewards enquired into possible interference at the final hurdle involving M C Muldoon, ridden by Mr P.W. Mullins, placed first and Whowonthetoss, ridden by D. Meyler, placed second, where it appeared that M C Muldoon jumped to the left and collided with Whowonthetoss. Evidence was heard from the riders concerned. D. Meyler in his evidence stated that his mount was turned sideways at the last hurdle, lost his momentum, took time to recover and was gaining on the winner going to the line. Mr. P.W. Mullins in his evidence stated that his mount went left at the last stride before jumping the hurdle but felt that movement from both horses caused the collision. Having viewed the recording of the race and considered the evidence, the Stewards were satisfied that any interference caused was accidental in nature. Having regard to the winning distance, they made no alteration to the Judges placings and took no further action. Mr. Justice Tony Hunt absented himself from this enquiry and Dr Paddy Molony acted as Chairman.

The winner holds an entry in the Supreme Novices' Hurdle at the Cheltenham Festival. His National Hunt debut saw him finish fourth in a big field maiden hurdle at Leopardstown.

He reached a mark of 100 on the Flat when trained in Britain by Peter Chapple-Hyam.