Magic Chegaga one for Weld and Orr 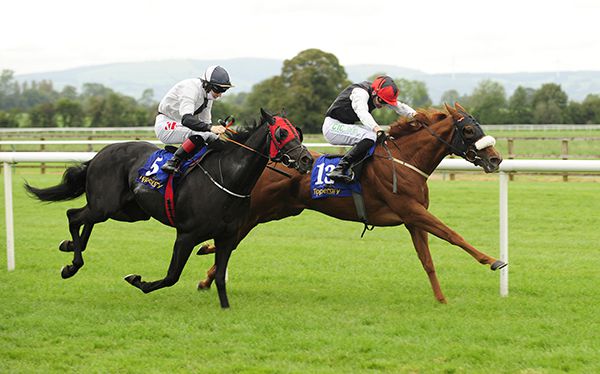 The first-time visor worked the oracle on Dermot Weld's Magic Chegaga (5/1) as she obliged in the second division of the mile and one maiden at Tipperary.

Oisin Orr got her away smartly from box nine and the pair soon held a good position in third.

Magic Chegaga closed on the approach to the straight and led turning for home. She was ridden a furlong and a half out, but faced a stern challenge from Fil The Power (8/1) in the final furlong.

The latter couldn't quite get on terms, though, and came in half a length down. The runner-up was two and a half lengths clear of third-placer Vultan (9/4).

"I don't think things went right for her the last day at Tramore but before that she had been very consistent," said Oisin Orr.

"Today suited by letting her roll a bit earlier and she stayed galloping right the way to the line and was tough and genuine. It was nice to get that win for her pedigree."

The Stewards requested a report from D. K. Weld, trainer, as to the apparent improvement in form of Magic Chegaga, placed first, as compared with its recent run at Tramore 15th August when finishing eighth of nine runners. Patrick O'Brien, Authorised representative of D.K. Weld reported that Magic Chegaga disappointed at Tramore but visors were fitted for the first time today to sharpen her up and they had the desired effect. Having considered the evidence the Stewards noted the content of the report.