Market's Field on target at Wexford 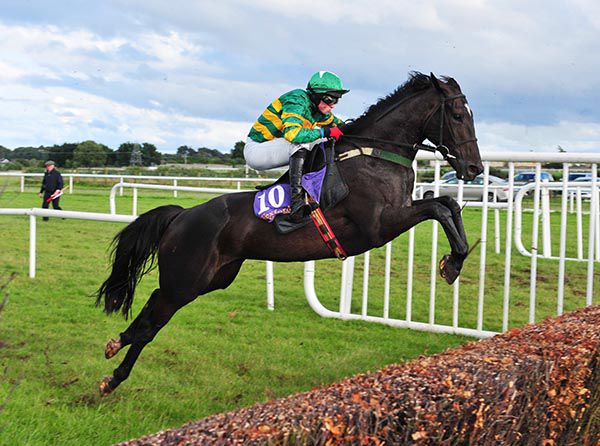 The Enda Bolger trained Market's Field sprang a 14/1 surprise in the Ferrybank Opel Beginners Chase, as the even money favourite Valgor Du Ronceray unseated at the seventh.

Unplaced on his previous six starts, the five-year-old son of Stowaway was settled towards rear by Donal McInerney.

He improved into a closer fourth from three out, and travelled best in third before the next. The JP McManus owned victor was ridden from the last, and stayed on best on the run-in, getting up to win by a head.

Caniwillyegiveme was the one just denied, and he had to settle for second at 11/1 under Shane Butler for Seamus Fahey.

Fenlon's Hill (16s to 12s) completed the placings another three lengths back in third for Adam Short and Paul Stafford.

Bolger said afterwards: "He got a lovely waiting ride from Donie. He was disappointing over hurdles so we said we'd crack on with him over fences. I think the race fell apart a bit with those two fallers (the aforementioned favourite and Theatre Wine).

"He is a big Stowaway horse and I think the ground probably played into his hands. He will definitely go on winter ground."

Ten up for Shane Kelly aboard Martin's Bright Flame

Fourth to Mountain Fox last time at Leopardstown, Bright Flame (7/1) outstayed that rival over the the extra half-mile to take the Fenor Handicap (Div I).

Palace Pier puts his unbeaten record and tall reputation on the line in a fascinating renewal of the Prix Jacques le Marois at Deauville on Sunday.

Itsalonglongroad made it two from two at Tramore, as he sprang a surprise in the Brennan's Pharmacy Tramore Handicap.

Mandarin Monarch scoots around the bends to win well

Mandarin Monarch (11/1) railed really well, in contrast to some of his rivals, before winning the Clonea Strand, Dungarvan Handicap by lengths from the staying-on 9/4 favourite Thosedaysaregone.