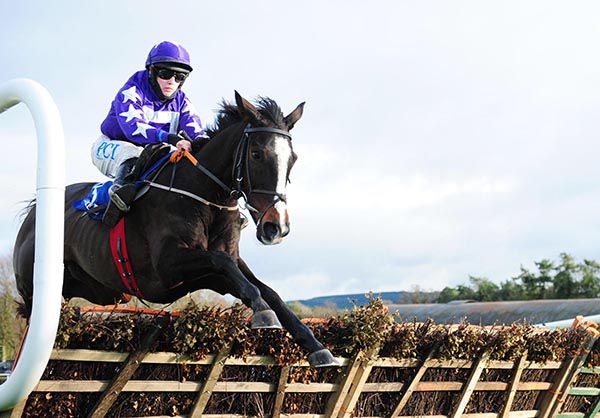 Second in the race last year Mary Frances stepped up to the number one spot in style in the Jim Strang & Sons Kilsheelan (Peugeot) Hurdle at Clonmel today. Completing a day of days for trainer Martin Hassett she was bringing up a 26 and a half to one double for the local handler.

Hassett sent out No Grey Area’s to win the previous heat under Pa King, and it was Rachael Blackmore that did the steering on Mary Frances. The Tipp woman was completing her own brace, after winning the opener on Epson Du Houx for Henry de Bromhead.

Never far away Mary Frances disputed the lead at times, but was headed five out before regaining the lead entering the straight.

"The brother Michael, who was 63 yesterday, rides her out every morning - he'll often say to let the young lads ride her and I'd say 'no, you know her' and she gives 110 percent every morning and at the races," said Hassett.

"We are mad to get black-type into her but all those mares races are over 2m4f and there is no three-mile black-type race for her unless she takes on the geldings - unless she goes over fences. If myself and Sean Flanagan had our way she'd jump fences but I don't think John (O'Mahony, owner) wants to.

"I'm delighted for John because they had some misfortune lately and Mary Frances is named after his mother. I'm delighted for the O'Mahony family as it is a big boost for them and I hope they're smiling.

"God only knows what she'll get after today and if it was really soft I wouldn't mind going back to the Galmoy Hurdle again next year - she wants bog."

He added "we must be the only yard who ride out with lights - we start every morning at 5.30am and have them finished at 7am and then I go to work in Coolmore. We installed seven or eight floodlights and we have 12 riding out."

This was a second double for the Hassett yard - Mary Frances and The Conditional won at Thurles in the past for them.

P. Townend, rider of Burrows Saint (FR) trained by W.P. Mullins, reported to the Clerk of Scales that his mount got very tired.

The Irish Horseracing Regulatory Board Veterinary Officer examined Dallas Des Pictons (FR), trained by Gordon Elliott, at the request of the Stewards and reported the animal to be post race normal.

The Irish Horseracing Regulatory Board Veterinary Officer examined Scarpeta (FR), trained by W.P. Mullins, at the request of the Stewards and reported the animal to be post race normal.