Maze delivers on debut over flights 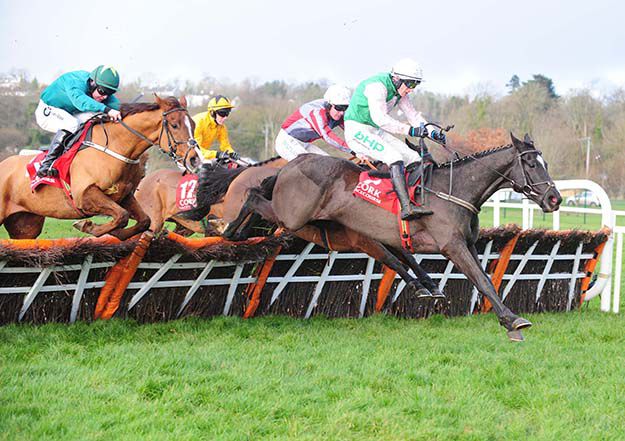 Maze Runner made the ideal start to his career over flights, as he took the opener at Cork, the Galtee 3yo Maiden Hurdle.

Without a win in eight starts on the level, the Willie Mullins trained bay finally made the breakthrough at Galway on his most recent outing.

Sent off the well-backed 13/8 favourite (from 5/2) this afternoon, the son of Authorized was settled behind the leaders by Paul Townend, and wasn't fluent at a couple of hurdles.

He took closer order from three out, and was pushed along to challenge after the next. An awkward jump at the last didn't help his cause, but he kept on best under pressure from there, going on to prevail by three parts of a length.

Union Gap (8/1) and Band Of Outlaws (5s to 10/3) both finished well to take second and third respectively, with a head separating them at the line.

Outsider Colour Me In (100/1) was just another half a length back in fourth, and looked set to spring a massive surprise approaching the last. However his effort petered out on the run-in.

David Casey, assistant to Willie Mullins, said: "He jumped indifferent but Paul said the hurdles felt big jumping out of the ground. He ran well a couple of times on the Flat and won well the last day so it's a good starting point.

"Paul thought they went a good gallop and it was a tough enough test for three-year-olds. Hopefully he can build on it and we'll see where we can go."

* The Stewards fined Brendan W.Duke, trainer, E65 for failing to fit the declared headgear in full to Uluru Park, prior to entering the parade ring.

* S.G. McDermott, rider of Brisk Tempo (FR) trained by Gavin Cromwell, reported to the Clerk of Scales that his mount made a noise.

* J.S. McGarvey, rider of Hawthorn trained by Joseph Patrick O'Brien, reported to the Clerk of Scales that his mount made a noise and was pulled up thereafter.

* C.D. Maxwell, rider of Shes Gold trained by Thomas Mullins, reported to the Clerk of Scales that his mount stopped very quickly turning off the back straight.