Meade doubles up with Harry Alonzo 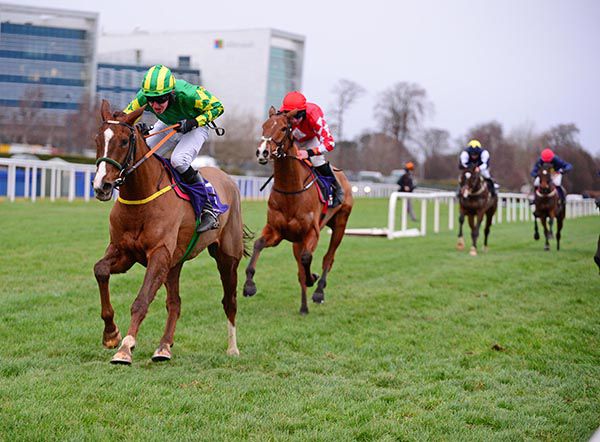 Harry Alonzo (10/1 into 7/1) completed an across the card double for Noel Meade when winning the Holden Plant Rentals INH Flat Race at Leopardstown under Pat Taaffe.

Diol Ker got the job done at Limerick earlier for Tu Va Stables with Michael Stenson, and Harry Alonzo was building on a debut second placing at Fairyhouse back in January.

This afternoon, again in the colours of his trainer, the Montmartre gelding beat a field that likely contained many future winners, seeing off Top Bandit and Collins by two lengths and three lengths.

“He's a really nice horse. We loved him all last year,” said Meade.

“He didn't run again after his debut, he just had a small hold-up. He's my own so I thought I'd bring him here and see how good he was.

“We'll keep him in bumpers this year and I'd say he'll be a very nice novice hurdler next year.

“The first day he probably didn't learn much. Sean rode him a piece of work the other day and I nearly said to him 'why didn't you wake him up a bit more'. He was cantering the whole way.

“When he got there today and he did wake him up a bit he quickened up very well. He's just a good horse I'd say.

“I'd say he'll definitely belong to someone else the next day, I'd hope so anyway.”

On Diol Ker meanwhile Meade disclosed: “After the couple of runs over fences Eddie (O'Leary) said 'that's it, he's going back over hurdles for another season'.

“He's high enough in the ratings so he'll be entered in all those three miles races, including the race at Cheltenham, as well as the handicaps.

“I wouldn't have thought Limerick would suit him that well, down the hill. He's a staying horse and needs a big track.”