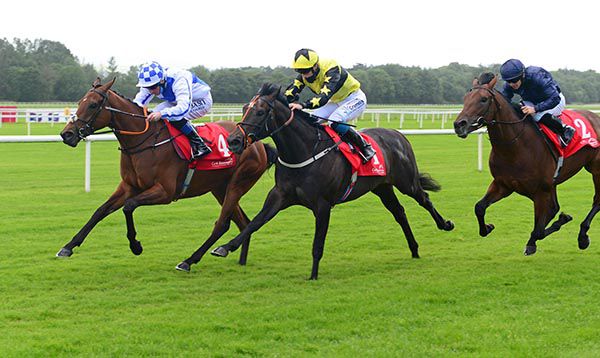 Usually run at the Curragh, the Marble Hill Stakes (Group 3) took place at Cork and Minaun (7/1) landed the prize to give trainer Henry de Bromhead his first Group winner on the Flat.

Second over a furlong further on her debut at Leopardstown, she was always handy and took over the lead two furlongs out from Arctician.

The latter didn’t lie down, and the pair had a good tussle with Minaun coming out on top by a neck.

The 4/9 favourite Military Style came off the bridle at halfway and could only keep on at the same pace back in third.

A half-sister to two winners, the winner was acquired for E8,000 at Goffs last autumn.

It was a quick double for Chris Hayes after Miss Amulet in the first, and the jockey also had a brace of winners yesterday at Naas.

Winning trainer Henry de Bromhead said: "I'm delighted with her, we've always really liked her and she is a lovely filly. Cormac Farrell recommended her for us back in March.

"I'm delighted for her owner Steve McCarthy and it is his and my first Group winner on the flat; he previously had Aerclub with us and we replaced him with this lady and she looks an able deputy.

"Hopefully she will keep progressing and Chris (Hayes) really liked her. She will definitely stay further and is from a really good Loder family.

"She has a Moyglare entry and is growing and maturing all the time so we won't be in a mad panic anywhere."