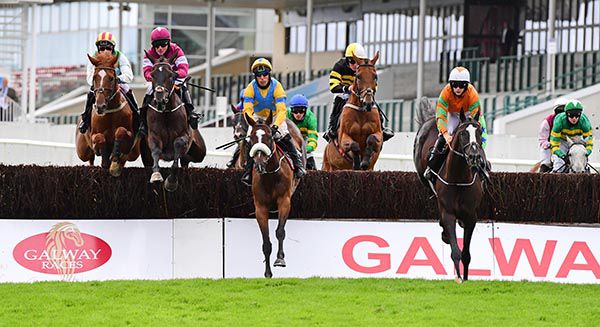 Mindsmadeup (11/2) made the best way home to seal the Guinness Galway Blazers Handicap Chase in the hands of Robbie Power.

The nine-year-old gelding jumped left two out in his pursuit of Mr Diablo and nodded on landing. Power soon got him back on an even keel and he jumped the final fence much better.

Mr Diablo was sent for home by Rachael Blackmore but he began to tire on the home bend.

He was there to be shot at and Mindsmadeup was ridden to get to him in the final 100 yards of this staying test.

Mindsmadeup kept on well to prevail by two and a quarter lengths. Mr Diablo clung on to second at 40/1 by three parts of a length to Cusp Of Carablli (11/1) who came from a long way back.

Trainer Matthew Smith said: "We were in two minds to run him this morning and two of the owners Shay Gillen and Tom McGrady decided to let him take his chance.

"This race was the plan last year but unfortunately he was lame the day before the race, so we had to pull him out and it was the target again.

"The intention was to hopefully win and get him up a few pounds and he'll go for the Kerry National now.

"It was lovely to get and Robbie gave him some ride in fairness to him."