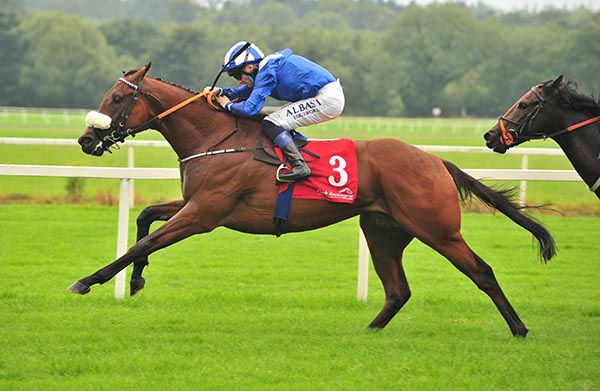 Just three went to post for this extended six furlongs juvenile conditions race after Larado (change in going) and Tralong Rock (lame) were taken out.

The betting centred around Monaasib (1/1) and Arctician (10/11), with All Things Bright a 40/1 chance, and the fancied pair dominated with Arctician setting the pace.

Chris Hayes made his move at the two-furlong pole on Monaasib, and the even-money shot was well on top in the closing stages to score by a length and a half.

Hayes said, “He’s a lovely horse. The boss had the nursery last week picked out for him but, when we saw the rating he got, felt there was no point in lumbering him with 10st1lb. We spotted this race and it worked out a treat.

“I got a nice tow into it, got there plenty soon enough and he rolled about a bit on me. I think he’ll improve and he could be a nice three-year-old.

“The boss said to me don’t give it to him (Arctician) easy and have a go at him from the two. He actually surprised me how well he picked up, and the fact that he handles that ground means we could have a nice autumn campaign with him.”