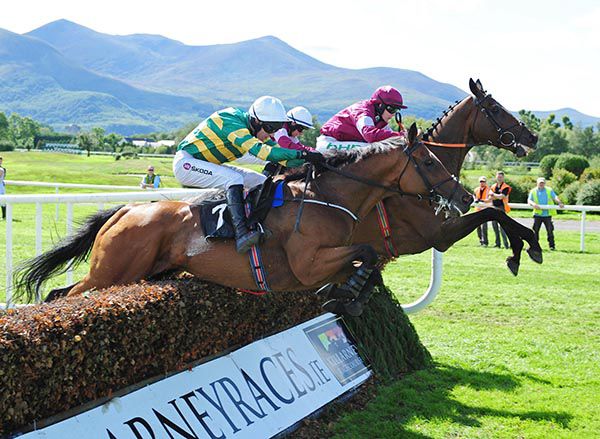 Roscommon's season concludes on Monday, with Joseph O'Brien again in search of the feature event on the card, the Grade Three Ballymore Irish EBF Novice Chase.

Twelve months ago when the extended two-miler carried its traditional Kilbegnet moniker, O’Brien struck with the JP McManus-owned four-year-old Landofhopeandglory.

Mark Walsh donned the famous green and gold of his boss then, and again the Kildare man rides for McManus and O'Brien here.

This time his mount will be Monarch, a Galileo gelding that arrives with a record of three wins from his last four starts.

His towards-the-rear effort in the white-hot heat of the Galway Hurdle should not be viewed too harshly, and the five-year-old is clearly a horse in tip-top form.

Monarch is joined by stable companion Dawn In The Park. Shane Shortall rides this Walk In The Park mare for Gigginstown House Stud.

O’Brien is not the only one to field more than one runner, Henry de Bromhead sending Arcenfete (Rachel Blackmore), Ornua (Dylan Robinson) and Classic Theatre (Davy Russell) into battle.

In-form Emmet Mullins has prospects with St Stephens Green (David Mullins), but his uncle, Willie Mullins, could provide the answer with Cadmium.

Paul Townend’s mount did not come up to expectations when a beaten 6-5 favourite at the Galway Festival under Ruby Walsh.

Only fifth then, the course and distance winner is back in trip now and sets a decent standard with his 146 rating.

His Kaatskill Nap looks good for the Roscommon On-Course Vets Maiden Hurdle, though.

He, like Kaatskill Nap, can improve on a Galway placing from a fortnight back.

Elysium swamped her rivals to spring a 12/1 surprise in the Group 3 Weld Park Stakes over seven furlongs in the Curragh.

A big field went to post for the juvenile maiden in the Curragh, but the market principals dominated as Van Gogh saw off Colour Sergeant.

Gosden has Breeders' Cup in mind for Fanny Logan

John Gosden has not ruled out sending Fanny Logan back to America for a second shot at glory in the Breeders’ Cup Maker’s Mark Filly & Mare Turf.