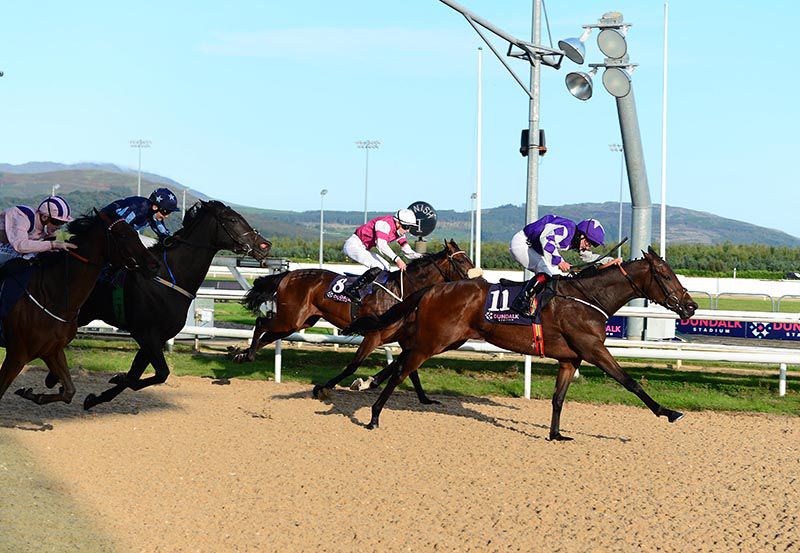 Monzoon and Mark Gallagher lead them home in the Dundalk opener
© Photo Healy Racing
Following on from Benefit Run, Longbourn and Universal Focus already this week, Monzoon was another winner for the Ross O’Sullivan stable in the Floodlit Fridays Return Claiming Maiden at Dundalk.

Mark Gallagher, who was on Longbourn at Tipperary on Tuesday as well, got Monzoon (7/1) home by three parts of a length and a neck from Quick Quick and Airlift.

Monzoon gained a narrow lead under two furlongs out having chased the leaders, whilst Quick Quick was switched right over a furlong out having come through from mid-division. He stayed on well in the final furlong on the outer, to press the winner close home.

“He had two lovely runs in maidens this year at the Curragh and Gowran but then ran on soft ground in handicaps at Cork and Punchestown," explained O'Sullivan.

“He’s really a good ground horse and one for the all-weather. We did fancy him today and Mark gave him a great ride.

“I would love to keep him as he’s progressive and still only a three-year-old. I think he’ll be better with a bit of time. The key to him is the ground and I think he’ll stay a little bit further.”

The Stewards interviewed A.J. Farragher, rider of Airlift, concerning his use of the whip in the latter stages of this race. Evidence was heard from the rider concerned. Having viewed a recording of the race and considered the evidence the Stewards were of the opinion that A.J. Farragher was in breach of R10(3)(g) by using his whip with excessive frequency. Having taken his previous record into consideration, the Stewards suspended A.J. Farragher for 3 racedays.