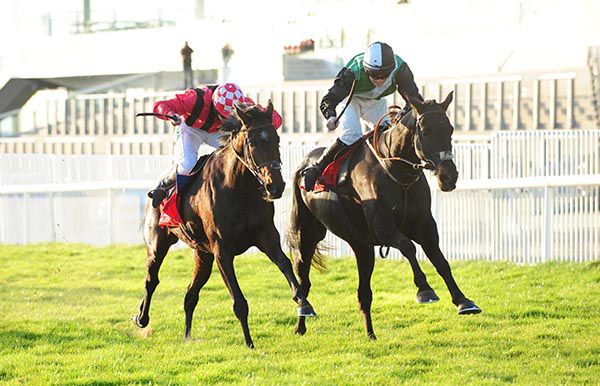 Jonathan Moore picked himself up from a nasty-looking fall from Brex Drago earlier on the card to produce a brilliant winning ride on Georgieshore (5/1) in the Faber Audiovisuals Handicap Hurdle.

He held up his mount well off the pace, but judged things to a nicety as the winner stormed home after the last (once again only five flights jumped) to catch Midland Millie (4/1) in the final strides for a neck success.

It was doubtless a well-received winner by Newbridge, Co.Galway owner Sean Mac An Bhaird, better-known as racing journalist Johnny Ward.

The winner had been running well when tipping up in a similar event here earlier in the month, which was his first outing for over 18 months. The Turtle Island gelding had previously won two heavy ground hurdle races at a modest level in Britain.

"It was a serious ride from Johnny, said Feidhlim Cunningham, assistant to trainer Gavin Cromwell.

"We said we'd drop him out and ride him cold. He was unlucky when he fell the last day and got through that ground well today and the jockey gave him an absolute sledger.

"We got him in June 2018 at the Ascot sale and we were aiming him at Listowel that year but had a little setback. He is 11 rising 12 but off that mark hopefully he'll win again."