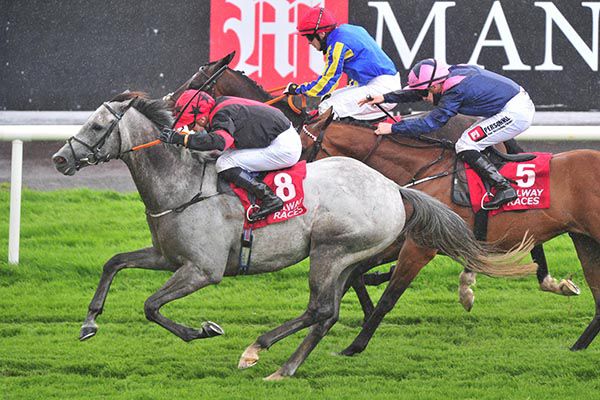 The late money was in one direction in the O’Leary Insurances Handicap at Galway. They came for Sirjack Thomas and those that backed the grey from 8/1 into 11/2 were proved correct.

Gavin Ryan is now leading Flat rider at festival 2020 with his fourth winner and here he was again teaming up with Dooley Thoroughbreds and Ado McGuinness after their big success here on Tuesday night with Saltonstall.

Pace-setter Ultra Pride promised to go all the way for a time, but Ryan sneaked around the inner on Sirjack Thomas from before the straight and eventually beat favourite Annexation by half a length.

“Gavin said he got hampered — he got a bang. He won nicely though,” said McGuinness.

“He’s a funny horse. We thought he wanted good ground but it’s not looking like it.

“Last year he won on soft ground in Sligo. He was working very well. He worked with Saltonstall last week and it was a cracking piece of work.

“He’s a nice horse. We’ll go hurdling with him at some stage later on in the year and he might go back and have another whack somewhere else with him on the Flat and see what happens.

“It’s great to get another winner down here this week. It’s great for the Dooleys, they are great supporters.

“It’s unfortunate they’re not here. At least I haven’t got a sore head this week though!