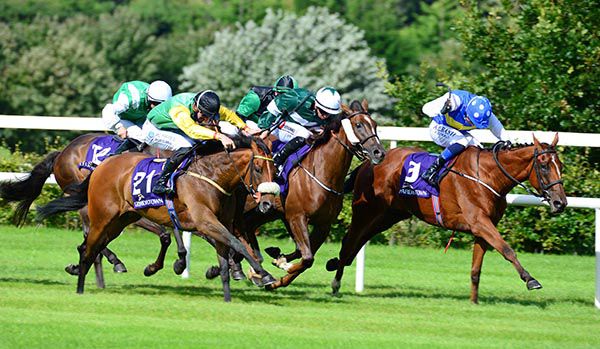 Third reserve Mountain Fox (11/1) stormed home with a power-packed finish to cut down Final Endeavour in the closing stages of division two of the Leopardstown Club 30 Handicap.

There were four nonrunners, and the two reserves ahead of him didn't run either, so he made the most of his opportunity.

It was fully January 2017 that Mountain Fox last encountered a mile and a half when sixth in Dundalk.

It was a different story today as the seven-year-old gelding really found his stride to grab 5/2 favourite Final Endeavour to win by three parts of a length. See The Eagle Fly (7/1) was another length and a half back in third.

“We were trying for a while with him. He's a game little horse and weight was killing him all along,” said trainer Frank Oakes.

“I just gave him a run here to see if a mile-and-a-half would suit him. I was running him over a mile and they were going a bit quick for him.

“On his last run he was fourth over hurdles in Kilbeggan with 11-7 and it was a great run.

“He was only a reserve this morning and only for Carmel he wouldn't have been here. She rang around different trainers to see if they were running and it was only at the last minute he got in.

“It worked out perfect. He'll probably go back over hurdles now, he's a brilliant leaper.”

This was Mountain Fox's second career success, with the other one coming in a maiden hurdle at Thurles in November 2018.