Mullins double at Clonmel as Townends play their part 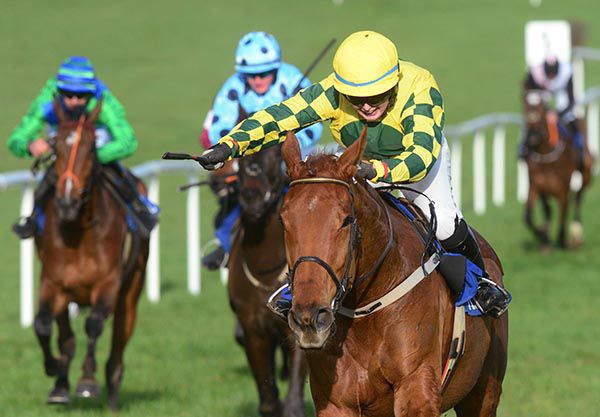 Willie Mullins brought up a double at Clonmel in the concluding Virtual Racing On The BoyleSports App INH Flat Race as Captain Kangaroo (16/1 on the betting shows, into a returned 10/1) made a winning debut in the hands of Jody Townend.

There was plenty of focus here on the fact that Patrick Mullins partnered Captain Kangaroo’s rival and fellow first-timer, Kilcruit, for his uncle Tony and grand-mother Maureen.

That Stowaway gelding ran a cracker from near the pace but he couldn’t manage the successful Mastercraftsman gelding inside the final quarter mile.

Captain Kangaroo was held up in rear, and he was closer in seventh five furlongs out.

The five-year-old went fourth travelling well on the outer entering the straight, and he led on the outer two furlongs out. Soon ridden the former John Hammond inmate stayed on well under pressure inside the final furlong to beat Kilcruit by four lengths.

“He’s a big horse but he’s very well-bred for the Flat. I’ve sat on him a few times at home and he was working well,” said Miss Townend.

“He was very good and got me there in a few strides. He surprised me and he’s very nice.”

Townend’s brother Paul, champion jockey and number one at Closutton, won the feature earlier on Bachasson for Mullins.

Mr B. O'Neill, rider of Yousayitbest trained by Henry de Bromhead, reported to the Clerk of the Scales that his mount hung left throughout.