Mullins doubles up on Redhotfillypeppers 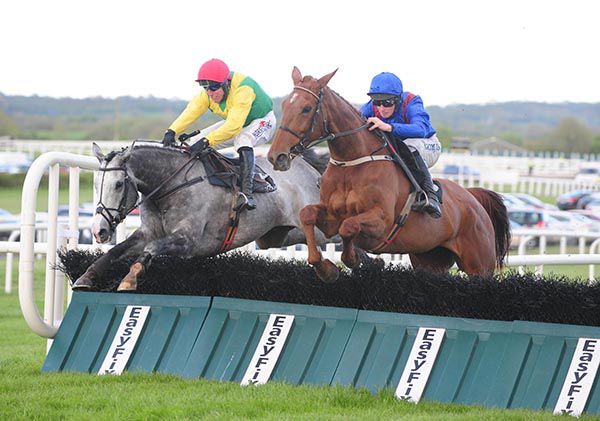 Redhotfillypeppers, near side, challenges Whisperinthebreeze at the last
© Photo Healy Racing

David Mullins made it a Kilbeggan double when driving Redhotfillypeppers past Whisperinthebreeze in the final 50 yards of the novice hurdle.

Whisperinthebreeze took over from long-time-leader Reach Up approaching the home turn and was soon ridden by Robbie Power.

Redhotfillypeppers and Mullins closed at the last, though, where Whisperinthebreeze held a very narrow lead.

Mullins went for the whip on the run-in and his mount kept on best to prevail by a length and a quarter at the end of an extended two miles three furlongs.

David Mullins, who took the preceding race on 7/4 favourite Tornado Watch, said: "She wants every inch of that two-and-a-half miles around here.

“She'd maybe be a bit better going the other way and jumping a fence.

“She's a lovely mare that will win plenty of races. I think they're starting to figure her out now that she's a big staying chasing mare. Every inch of a test is ideal for her.”