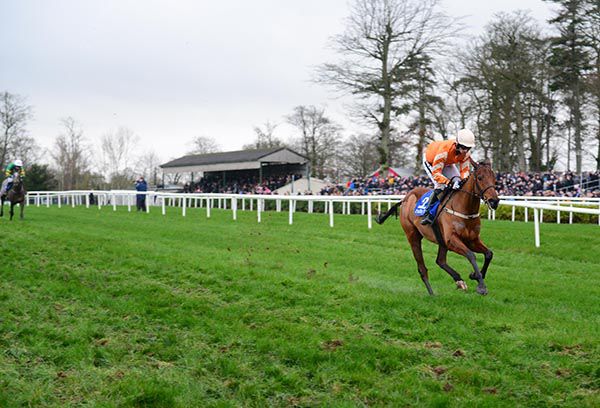 There was strong reassurance about the health of Willie Mullins' string as he took the last three races on Thyestes Day at Gowran, culminating with Blue Sari's very taking performance on debut in the P.J. Foley Memorial INH Flat Race.

Invitation Only landed the big one for Closutton, whilst Cilaos Emery supplemented those gains for Mullins and Ruby Walsh in the beginners chase.

In this bumper Patrick Mullins was in the plate on the M L Bloodstock Limited-owned Blue Sari (13/8 out to 15/8). The same owner's Barnes Des Mottes was a non-runner owing to a stone bruise.

M L Bloodstock also bred runner-up and favourite Front View (representing J P McManus and Joseph O'Brien) but he was only very one-paced in comparison to the winner, going down by eleven lengths.

“That was very good. We thought he'd stay alright but we weren't sure he had any speed,” said Mullins.

“He certainly is way better on grass than he is at home on our gallops. It looked a top notch performance.

“That's certainly way over and above anything he does at home so we're very pleased with him.

“I thought the soft ground would suit him. All his work at home has been very dour but that looked special so I'm looking forward to him for the rest of the season.

“He never showed us that at home. He's very workmanlike at home but there he looks to have a bit of class about him.

“The owners had Twinlight with me before. They have a lot of horses in training in France.

“We might look at the four-year-old bumper at Limerick. I don't know if there is much around the country for Cheltenham so he could very possibly go there but normally with four-year-olds we'd go to Limerick.”

The Stewards interviewed T.J. Taaffe, trainer of Walking Fame, following a report from the Irish Horseracing Regulatory Bord Veterinary Officer, that she was unable to identify the animal from the passport provided. Evidence was heard from the trainer concerned, who stated that the animal was bought through the sales ring and he was unable to offer an explanation for the irregularity. Having considered the evidence, the Stewards ordered the withdrawal of Walking Fame from this race and referred the matter to a Senior Racing Official for further investigation, under the provisions of Rule 90(vi).

The Stewards interviewed Mr. J.M. Burke, rider of Thousand Tears, concerning his use of the whip in the closing stages of this race. Evidence was heard from the rider concerned. Having viewed a recording of the race and considered the evidence, the Stewards were of the opinion that the rider was in breach of Regulation 10.3(f), in that he had used his whip with excessive frequency. Having taken his previous record in this regard into account, the Stewards suspended Mr. J.M. Burke for 2 racedays.