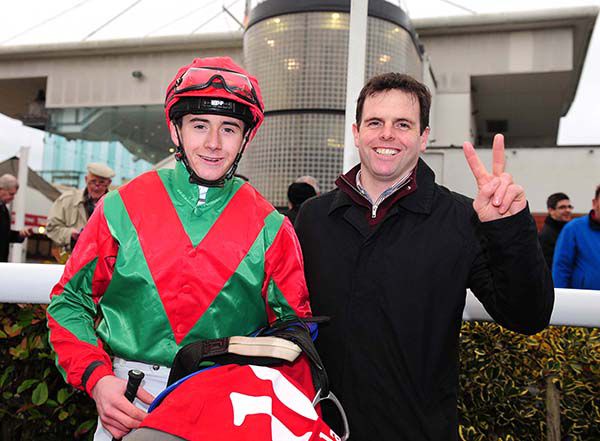 Castlecomer trainer Pat Murphy notched a quick double at Dundalk this afternoon when No Approval gave him victory in both divisions of the mile handicap.

Koybig had completed a hat-trick when taking the first heat of the contest and his stable-mate emulated his victory 35 minutes later.

Ben Coen got a good tune from the 4/1 shot inside the final furlong and he got up in the closing stages for a short-head success from Turn On The Tears.

The winner had been third over course and distance last month.

Murphy said afterwards:- “That’s my first double. The horses are going well and we knew he was in good form.

“He went close the last day and got a bit lonely on the rail. I thought the same thing was going to happen today but in fairness to Ben in got him home well.

“The horse needed every pound of Ben’s claim and he’s great value for it. He’s not the sort of horse you would run back too soon but we may get him out just before Christmas.

“There is a chance that Koybig may run before Christmas as well. He’s not doing anything wrong and we’ll mind him and see how he is after today.

It was a third winner for 10lb claimer Ben Coen and his claim will now be reduced to 7lb.