Mutadaawel could be Lincoln bound after Dundalk win 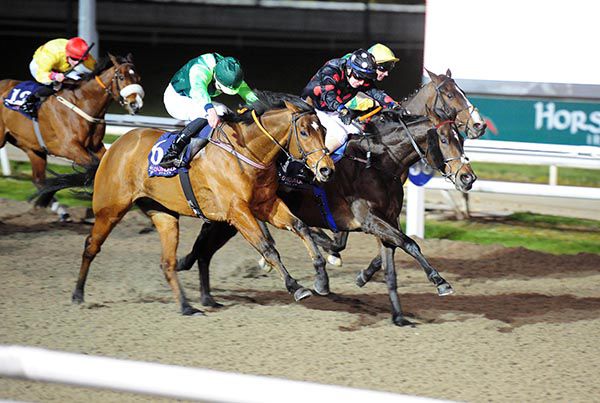 Following on from a March 2019 win over a mile on the polytrack, Mutadaawel did it again in the spring under the lights in the Floodlit Fridays Continue At Dundalk Stadium Handicap.

The son of Invincible Spirit is clearly well suited by eight furlongs at this venue.

Here for Anthony McCann and Conor McGovern the 9/1 scorer led and disputed, and he was headed after two and a half furlongs.

Second at the halfway stage Mutadaawel was ridden to press the leaders two furlongs out.

He gained a narrow lead a furlong out, keeping on well under pressure in the final furlong, all out close home to beat Koybig by a short head.

It was just a neck then to Adnap in third.

“We were very unlucky in a handicap last year at the Curragh,” said McCann.

“He’s a horse that I think will go with a bit of cut in the ground and I have him entered in the Irish Lincoln. He needed to win tonight to get in and he still might not get in but he has a better chance.

“He’s a horse we thought highly of. The last day Wayne Lordan rode him and said he just wasn’t one hundred per cent but he was after coming back off a break.

“I put the cheek pieces back on him. He worked at the Curragh last Sunday morning and worked very well.

“David Egan got off him after finishing second in Newmarket last year and said there is a big handicap in him.

“Conor is back as an apprentice to me and it’s brilliant for him. Hopefully he will get a few more rides now off the back of that.”