'No decision yet' on Cyclone target 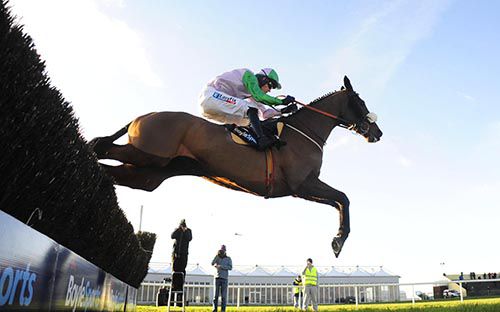 Hidden Cyclone galloped after racing at Leopardstown today and Hanlon later commented "we won't make a decision yet on him. If it's soft ground it'll be more than likely the Queen Mother but if it's good I'm thinking strongly about the Ryanair.

"Patrick (Mullins) rode him to have someone different on him. I did the same thing last year and he ran well."

Nunthorpe back on agenda for Ward two-year-old

A tilt at the Coolmore Nunthorpe is back on the agenda for Golden Pal after a change of surface prompted connections to withdraw from a race at Monmouth Park on Saturday.

Further top-level assignments await Veracious after the Group One-winning mare made the perfect start to her campaign with victory in the BetVictor British EBF Dick Hern Stakes at Haydock.

The 5f 2-y-o maiden produced a good finish with the well-backed Sloane Peterson (3/1 fav, from 11/2 this morning) racing on the stands’ side just getting the better of the low-drawn Mooneista (7/2).

The opening 2-y-o fillies’ maiden went to Emaniya (11/2) who scored by three quarters of a length in the hands of Oisin Orr.