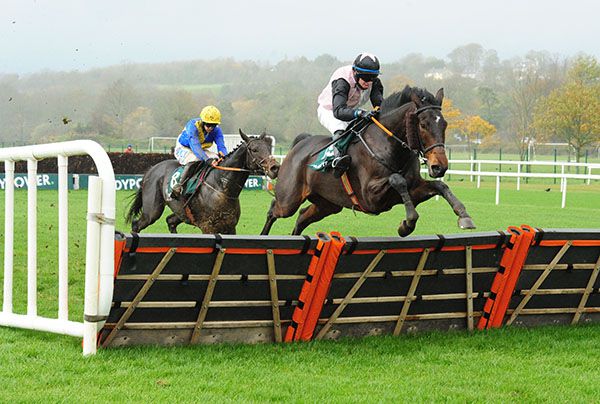 The Paddy’s Super Enhancements Maiden Hurdle (Div II) went to Indiana Jones (15/8 jt fav) who, after getting in as a reserve, looked a strong galloper as he made all under Dylan Robinson.

Hurricane Cliff (10/3) looked a threat at the second-last but the winner shrugged off his challenge before the last to score by five and a half lengths, with the other 15/8 joint favourite King’s Vow back in third place.

The winner, by Blue Bresil (sire of Mick Jazz and Le Prezien), had a nice run when second of 16 in a 3-year-old hurdle at Auteuil last September before being sold the following month for E280,000.

Trainer Mouse Morris, whose Barney Stinson had finished runner-up for the same owners, Robcour, in the first division of this 4-year-old maiden hurdle, said: "Chasing! He is 17 hands but I wouldn't think he'll go chasing this season.

“He was big and raw and is doing it very well every day. He'll be a nice horse next year.

"I have some nice four-year-olds."

Denise Foster to take over licence from Gordon Elliott

Denise Foster is set to take over the reins at Gordon Elliott’s yard following the Grand National-winning trainer’s suspension.

Cloth Cap cemented his place as ante-post favourite for the Randox Grand National with a dominant front-running display in the bet365 Premier Chase at Kelso.

Fiveaftermidnight caused a 22/1 surprise when just coming out best after an exciting finish to the NavanRacecourse.ie Mares Handicap Chase.

Emmet Mullins sent out yet another big-race winner across the water when The Shunter won the valuable bet365 Morebattle Hurdle at Kelso.