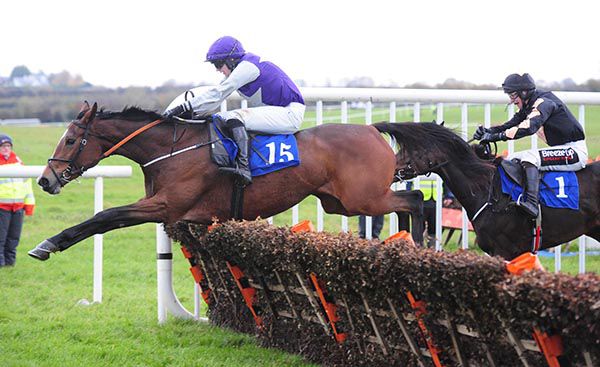 Mrs Milner had the best part of fifteen lengths to find with Flicker Flame on their meeting behind Rebel Og over the course and distance a fortnight ago. Find those lengths she did though, and more, to win the Templemore Mares Maiden Hurdle at Thurles under Sean O’Keeffe.

Given the form of her stable, that of Paul Nolan, it wasn’t all that surprising to see Mrs Milner clipped into a starting price of 9/2 from a show of 6/1 on track.

Supported down from double figure prices earlier, the successful daughter of Flemensfirth sealed this win with a good leap at the last. At the line she was five lengths and six and a half lengths up on aforementioned favourite Flicker Flame, and Bonarc.

"She got herself into it with her jumping and he finished with plenty of mare as well and had loads left so please god she'll improve away," said Nolan.

"I didn't think she'd be able to do it as good as that but it is nice to get a bit of ground for her. I'm not sure if she'll handle it testing or not but we won't left her out anyway.

"Sean's claim is a help and I think he is a very good chap. He has been very unlucky with a few injuries but hopefully they are behind him. He is riding at the right time of the year now so please god he'll stay in one piece and hopefully the screws that are in him will hold!"

At the request of the Stewards, B. Hayes, rider of Bonnemine (FR), trained by John Joseph Hanlon, reported to the Stewards' Secretaries that his mount was never really travelling and that it did not finish out its race well.

At the request of the Stewards, I. J. McCarthy, rider of Porterhorse, trained by Eoin Christopher McCarthy, reported to the Stewards' Secretaries that his mount was flat out all the way and then made a bad mistake at the last. .

The Stewards enquired into the running and riding of Benfit Of Kash, ridden by T.N. Brett, and trained by John Patrick Ryan.

Evidence was heard from the rider and trainer concerned. T.N. Brett stated that his instructions were to drop out, get his mount to settle and to do the best he could.

He said his mount had ran very poor previously when running prominent, only to fade quickly.

He said his mount jumped well throughout, came off the bridle before getting a second wind and ran on one paced in the closing stages to pass tired horses.

He also stated that he lost some ground by avoiding a faller at the second last hurdle.

John Patrick Ryan, confirmed the instructions given and expressed his satisfaction with the ride.

He stated that his charge was a very limited filly that had disappointed in the past.

He further stated that knowing his charge the way he does and how moderate her work is at home, he was pleasantly surprised at how well she finished out her race today.

The Stewards also received a report from the Irish Horseracing Regulatory Board Veterinary Officer, who stated that Benfit Of Kash was found to be post race normal.

Having viewed the recording of the race and considered the evidence, the Stewards noted Mr. Ryans explanation and advised T.N. Brett to be seen to ride stronger in the closing stages in future.