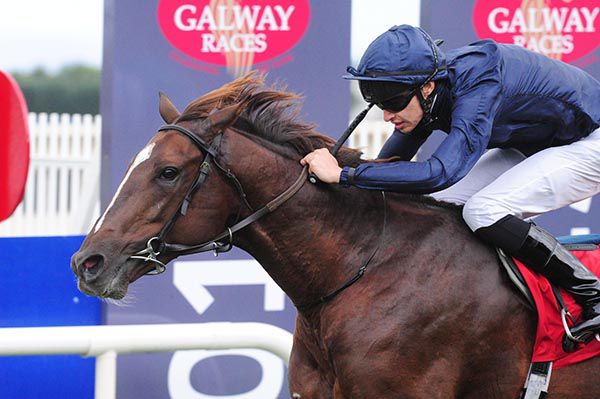 Galway Festival one-two Royal County Down and Mythologic give Aidan O’Brien a strong hand in the featured Matchbook Irish EBF Premier Nursery at Cork on Sunday.

Having opened his account at the third time of asking with the narrowest of victories at Down Royal in late July, Royal County Down got the better of stable companion Mythologic by a neck at Ballybrit.

With Mythologic 2lb better off at the weights for the rematch, he must have a chance of turning the tables. However, the application of blinkers for the first time may help Royal County Down find enough improvement to confirm the placings.

It is not all about the Ballydoyle duo, with Jessica Harrington’s Silence Please of obvious interest on her handicap debut.

The daughter of Gleneagles was a comprehensive winner on her racecourse introduction at Gowran Park and the second, Believe In Beauty, has filled the runner-up spot again at Sligo since to give the form some credibility.

Silence Please enters the handicap arena on a mark of 89 and it will be interesting to see how she fares for a trainer who is enjoying a superb season with her two-year-olds.

There are three other previous winners in the field, with the Ger Lyons-trained Marchons Ensemble joined by Dolce Sicily from Ross O’Sullivan’s yard and Willie McCreery’s Windham Belle.

Windham Belle won at Dundalk in May, after which she finished a close third in a conditions race at Naas.

She weakened quickly after cutting out much of the running in the Group Two Airlie Stud Stakes at the Curragh on her latest outing — a race won by Harrington’s 1000 Guineas favourite Albigna — but has significantly less on her plate this weekend off a rating of 81.

McCreery said: “She’ll have to settle better than she did the last day. If she does that and they don’t get too much rain down there, she’d have a chance.

“She just raced too free the last day. Hopefully Billy (Lee) can settle her this weekend and she can come home well.

“The straight track in Cork is a beautiful track that drains well, so I don’t think the ground should be too bad.”