O'Connell back among the winners with 66/1 shot 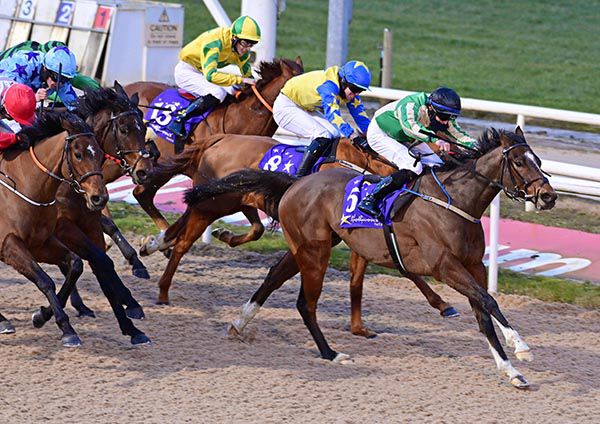 Eamonn O’Connell bridged a gap going back to November 2018 to return to the number one spot courtesy of 66/1 shot Flylikeaneagle in the HOLLYWOODBETS HORSE RACING AND SPORTS BETTING Handicap at Dundalk.

Winning jockey Trevor Whelan formerly plied his trade both over jumps and on the level in the UK, and he was on the mark since returning to home soil aboard Isle Of Sark here in November.

On this occasion, in the colours of the Sweet As A Nut Syndicate, Whelan got Flylikeaneagle home by three parts of a length from Chateau Musar.

Less than a length and a half covered the first six across the line.

Flylikeaneagle was having just his fifth start for O’Connell, and he’d won twice previously for Mark Johnston, both victories coming under Joe Fanning at Beverly.

“We were hoping that the hurdles had sweetened him up as he's a tricky old devil,” said O'Connell.

“We thought he'd run well and we're happy that he went and did that. We've no real plans after today but could come back up here as he obviously enjoyed it.

“He does look around when he hits the front, so he was in front plenty soon enough, but it worked out. He jumped well and travelled today.

“He's nearly 20lb better off than he was as a two-year-old so he had it in him to go and run a good race and he did.

“We've been happy enough with him over hurdles, he enjoyed it. This was a stab in the dark and it worked.

“I think he'll run away over hurdles. That was a great boost to get him to win as he hadn't won since he was two. His form early on in his life was very good.”

S. Foley, rider of Gougane Barra (USA) trained by M.Halford, reported to the Clerk of Scales that his mount did not get a clear run in the straight.

L.T. McAteer, rider of Vormir trained by F.Birrane, reported to the Clerk of Scales that his mount never travelled.