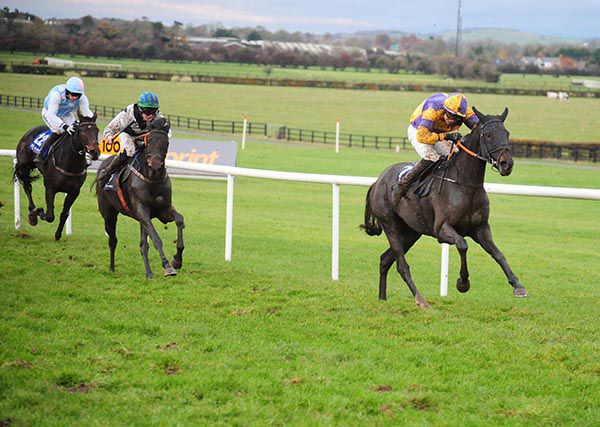 The daughter of Oscar chased home last season's top class bumper mare Gypsy Island on debut at today's venue in March and while she subsequently disappointed at Wexford in April, today bounced back to form when beating More Info.

Nolan's horses have done notably well in recent months, with Valentina Lady being his seventh winner in six weeks, and following the race the Irish Gold Cup winning trainer reported “she travelled like a good filly.

“She was second to Gypsy Island here when we switched her off to get her settled but then she ran no sort of race in Wexford.

“We gave her a break and Michael Doran rides her out every day and is brilliant with her. She jumps very well and hopefully she will materialise into something nice.

“I liked the way she settled today and travelled very well into the race. Sean gave her a very professional ride and he said she just idled when she hit the front.

“I wouldn't like to go to the well too soon with her and John (Brennan, owner) leaves it to us. It would be great if she could pick up a bit of black type.”

Jockey O'Keeffe had earlier initiated a notable double as he steered the Philip Rothwell trained 20/1 chance Fiveaftermidnight to win the handicap chase.

Horse Racing Ireland has today announced a number of significant changes to the conditions for the inaugural running of the Irish EBF Ballyhane Stakes (Median Auction Race) over six furlongs at Naas on Sunday, August 23.

John Quinn is to look at all the big sprints for Liberty Beach following another fine effort from the three-year-old filly at Sandown.

The Curragh races today at 4.15pm and the going is now Yielding, Yielding to Soft in places (on the straight) and remains Yielding on the round course after a dry 24 hours. A mainly dry day is forecast.