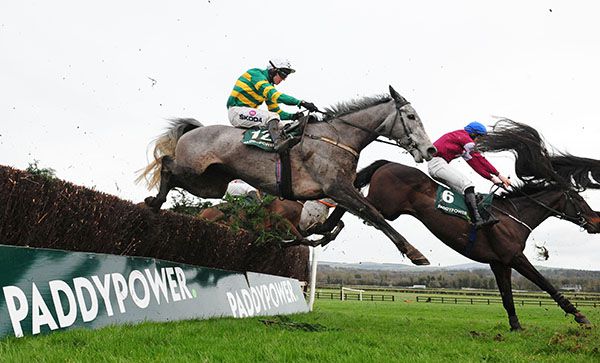 Castle Oliver powered home on the run-in to land the spoils in the €50,000 PaddyPower Novice Handicap Chase at Naas this afternoon.

The JP McManus-owned gelding was racking up a hat-trick of wins over fences having joined Padraig Roche last November.

Mark Walsh, completing a quick double on the card, settled the 8/1 shot behind the leaders and he was taking closer order when slightly untidy at the second last.

The Stowaway gelding jumped into fourth over the final fence and found plenty for pressure in the closing stages as he got on top to score by three-and-a-half lengths from Countess Cathleen.

Roche said:- “Mark said they were going a bit faster today than his previous two races and he made a few mistakes. He did well to get back into it.

“He loves that ground and he stays all day. He’s a lovely horse to have.

“We put him in the Leinster National back here in a couple of weeks and we’ll see what JP and Frank want to do.

“We’ll see how he comes out of this and that experience will do him the world of good.”